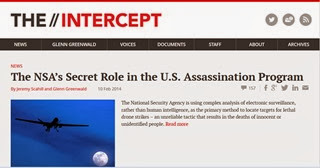 Pierre Omidyar’s First Look Media website announced the launch today of The Intercept, and with it, a blockbuster story on the role of the NSA in US drone assassinations that is sure to stir up controversy:

The National Security Agency is using complex analysis of electronic surveillance, rather than human intelligence, as the primary method to locate targets for lethal drone strikes – an unreliable tactic that results in the deaths of innocent or unidentified people.

If you click and get a server error, try again later—The Intercept must be one of the hottest sites on the web right now and the server appears overwhelmed for the moment.

I can’t get to their website either. If you’re dying to know more, try Google cached version of this story.

Basically, they report that the NSA provides location information for a target’s SIM card, but alleged terrorists may leave their cell phone at home, knowing that they are being tracked. Then the CIA drone drops a missile on their home, killing the family and neighbors.

A former drone operator described the program in the report as “death by unreliable metadata.”

Check out also Amy Goodman’s interview on Democracy Now with Intercept journalists Glenn Greenwald and Jeremy Scahill. The video is embedded below, or can be viewed on the Democracy Now website or tonight on `Olelo channel 54 at 11 p.m. A transcript is available at the link just above.

Click the thingy at the lower right for full screen.

To add The Intercept’s RSS feeds to your feed reader, the website does not have the usual metadata, but a separate page with feeds on it is located here.

First Look Media lacks both metadata and feeds. I tried to create an RSS feed myself, feel free to try it, with no guarantees, here.