Take action to get a hearing for John Mizuno’s "Homeless Person's Bill of Rights," HB1889

I knew I subscribe to the newspaper for a reason—this morning’s Star-Advertiser highlighted Rep. John Mizuno’s "Homeless Person's Bill of Rights" bill, HB1889.

You can track the "Homeless Person's Bill of Rights" on Twitter by following @HB1889. 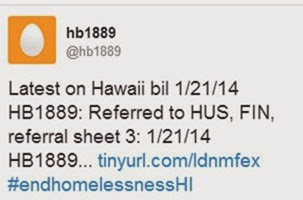 The wording is the same as Connecticut’s landmark law, passed last year.

The article on page B1 notes that the bill would conflict with city ordinances, and so could have a rough time passing. This is certainly true, but Hawaii’s state legislature has passed some tough bills in the past.

California’s state legislature also has a bill before it which I think should be adapted for Hawaii. For example, it begins:

In the State of California, there has been a long history of discriminatory laws and ordinances that have disproportionately affected people with low incomes and who are without homes…

We have a similar history, and if the state legislature has enough guts, it can stand up for our people “with low incomes and who are without homes” who have faced more than just discrimination by the City and County of Honolulu.

Let’s not pussyfoot around this: they have been persecuted and chased to the edges of the sidewalk by a series of city ordinances that punish rather than assist them. The House, in particular, needs to make amends for its member, Tom Brower, who decided that wielding a sledgehammer on the streets of Waikiki was an appropriate remedy for homelessness, and embarrassed Hawaii before the nation and the world:

Bully. It's the word we use for people who harass others weaker than them. That's what Tom Brower was this week. Nothing about harassing homeless people is cool, or intelligent, or helpful to the conversation.

with/visiting committee chairs. The bill is referred to the House Committee on Human Services. If it is not to die, chair Mele Carroll has to schedule the bill for hearing. You can email her at repcarroll@capitol.hawaii.gov or just call her office at 586-6790 and ask that HB1889 be scheduled for a hearing. Piece of cake. Do it. If you’re in her district, be sure to say that.