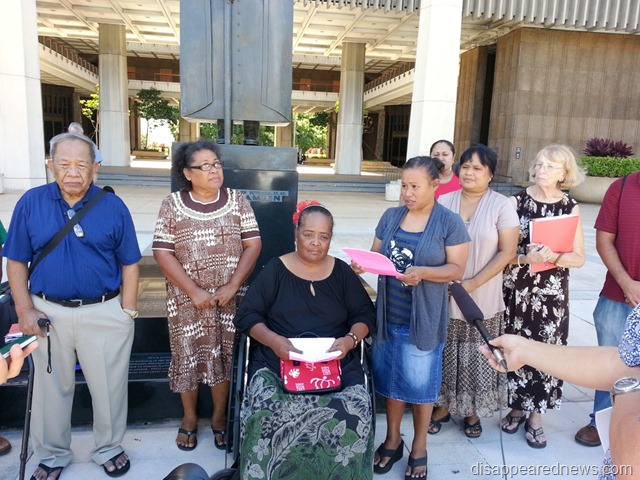 The Hawaii Appleseed Center for Law & Economic Justice (hiappleseed.org) along with Alston Hunt Floyd & Ing filed a class-action civil lawsuit in federal court this morning against the Hawaii Department of Transportation. A copy of the complaint is posted below.

The suit alleges civil rights violations against a class of residents of Hawaii who, because of their national origin, have limited English proficiency and have been unable to obtain driver’s licenses because the HDOT refused to provide translations or allow interpretation of the exam, which is currently available only in English. FACE (Faith Action for Community Equity facehawaii.org) joined with the plaintiffs in the complaint.

As Gavin Thornton, Deputy Director of Hawaii Appleseed explained, the HDOT has had translations in various languages, but withdrew them when three new questions were added to the exam. Instead of updating the translations, the test was thereafter administered with no language support provided to non-English speakers.

…over ten years ago, FACE successfully advocated to get translations in place for nine different languages. Their purpose was to provide access to a driver's license for non-native English speakers that understand driving laws, but do not understand unfamiliar words and phrases on the exam like "inadvertently " and "ride up."

As a result of HDOT’s withdrawal of the translations, FACE holds that thousands of Hawaii residents became unable to obtain driver’s licenses. Some have resorted to driving without a license, and some have been cited when stopped by police.

Are police profiling in Hawaii?

A casual conversation with a couple of the people assembled for today’s press conference suggests to me that there may be another civil rights issue embedded in this one. While speaking to a “couple of people” is not a significant sample, I took away that police may be stopping drivers who appear to be Micronesian or members of some of the ethnic groups represented in the plaintiff class simply to demand to see their driver’s licenses. If further research should find that this is the case, then there would be an issue of racial profiling on the part of the police.

For now, that has to be left as a question for future study. It’s not part of this lawsuit.

A copy of the complaint is attached below. This is an OCR copy and may contain errors. Do not rely on this copy.