A new newspaper archive for Hawaii: Go back 100 years without leaving home

Research Buzz is a website I’ve been following since before it was a website, which seems like prehistoric times. My earliest saved email is dated November, 1998, which was Issue #5, but it’s been going since 1996. I guess I’m just a late adopter.

The state of Hawaii has a new digitized newspaper archive — the Pacific Commercial Advertiser is now available. 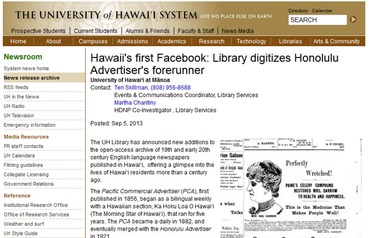 Actually, there’s a lot to “Like” in this archive. I had been reading the “editorial” page of The Hawaiian Star for 100 years ago today, and will have to check out the new archive.

The archiving was done by the University of Hawaii and the pages reside on the Library of Congress website.

This is so much better than poring through rolls of microfilm at a physical library. I’d never do that just for fun, but following a paper from 100 years ago almost each day is something like having a delayed Twitter—I don’t know a better way to get a sense of what was going on here in history than to dive into an on-line archive on my computer screen. And it’s so easy to do. It’s easy to imagine a tweet across the centuries with breaking news of that day.

Admittedly, it is “history” seen through a distorted lens.  For one thing, the paper I’m looking through is run by and for the capitalists. Page 1 is just ads. Even page 2, which has an editorial column (see below), is ads other than the two leftmost narrow columns of original material.

The ads are also revealing, of course. Today I learned that there were at least two competing telephone systems in Honolulu at that time. I hadn’t noticed that before. I’ll bet there’s an interesting history just around how those phone companies developed and what became of them.

Once you put in date ranges and so forth, the presentation of a single page appears on the screen. You can easily view thumbnails of all the pages, enlarge them to full-screen, and with a cup of espresso in hand, flip through the paper as though you had time-traveled to that day. Pages are downloadable and printable.

Reading the editorial in The Hawaiian Star, September 08, 1893, Page 2, I was thinking that here is a precursor to our current DBEDT state agency. Not that the editors turned out to be wrong in their exuberance about Hawaii’s economic future, but the column just oozed so much greed.

And nothing I found in their text or the ads gives any sense that there are Native Hawaiians still living at all. They don’t appear on the page. Coming upon it by accident, it would be hard to identify it as a Hawaii newspaper.

On the other hand, they are open about their position. On page 4 (see image, center) they state: “Editorially, the Star is an outspoken and consistent advocate of annexation to the United States.”  I wish our current papers were so revealing of their biases. 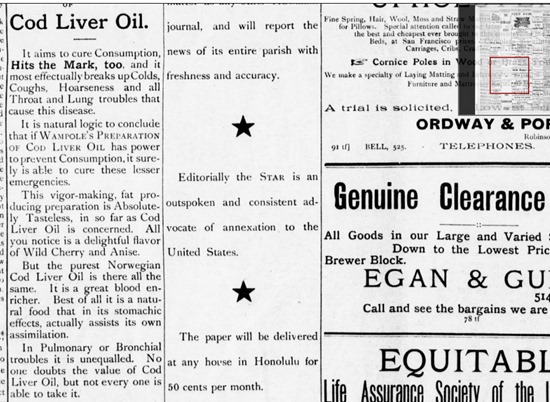 For your reading pleasure, here’s the leftmost editorial column, including the paper’s masthead for that date, and below it, an ad for an excursion to the volcano:

MONEY WAITING I HE BOOM.

The fact that money is being withdrawn from investment in the United States and Australia because values there are on the downward grade, would be very much to Hawaiian advantage if annexation should come within the next few months. As Minister Blount hints and the New York Sun says, Hawaii will have a tremendous boom the moment the American colors are hoisted here for good. Now with millions of idle capital locked up on the neighboring continents what could be more natural that much of it should find its way to a place where values will be on the rise and will be certain to reach as great an altitude as they ever did in the most favored sections of Western America. To the cautious capitalist whose money has been taken from banks and stock companies and is drawing him no further interest, the temptation to take a “flyer” here will be very great. From experience at home he will know-that if Hawaii had nothing more than a good climate and an ordinary commerce, the group would boom on those alone for at least a couple of years; but when he realizes the immense groundwork of prosperity in the sugar, coffee, small fruit, vanilla, cocoa, ramie and sisal products ; the enormous trade that will center at these “cross-roads of the Pacific” when the Nicaragua canal shall have been digged and the cable laid; the wonderful sanitary and scenic attractions of the “Paradise and the Inferno,” as our edenic and volcanic charms are designated, he will not be likely to hold himself back from large investments. Under annexation Hawaii could not fail to be the Mecca of unused dollars and pounds sterling, the goodly influence of which it would feel in the increase of sugar and coffee plantations, the developement of the latent resources of the soil, the construction of railways and public works, the building of homes and the general rehabilitation of business in Honolulu, Hilo, Lahaina and in many new towns, led by Pearl City, which would be conjured up by good times and ample immigration.

We expect to see all these good things come to pass in the near future. That they are not visionary or problematical is proved by the history of every attractive region and commercial entrepot between Buffalo and Puget Sound which has been subject, in turn, to the bold western advance of the American home-builder and capitalist. These pioneers of progress follow the flag wherever it goes, and they bring prosperity with them. They are visibly waiting now for fate to fix the American status of this fruitful archipelago.

This and other ads repeat on different pages in the paper. While it is possible that the advertisers paid for them, on the other hand, from my experience on my college newspaper, when we didn’t have enough copy, we might just put in an old ad that was lying around, and who knew… .