Kathryn Xian announces her run for Congress at the Capitol

Kathryn Xian (website here) announced her candidacy for Hawaii's 1st Congressional District seat this afternoon on the steps of the State Capitol, surrounded by supporters and staff (several more than fit in this picture). 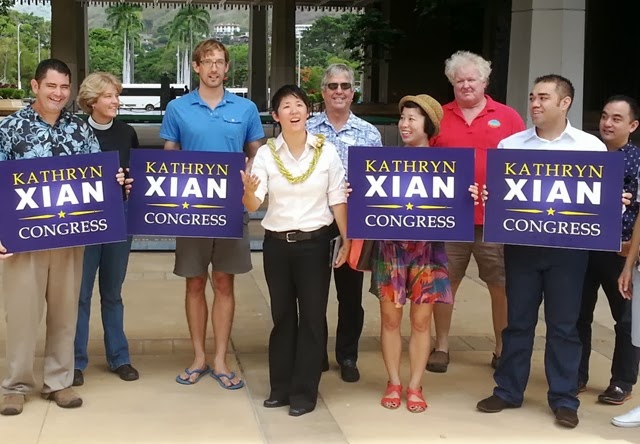 Xian, who is the Executive Director of the Pacific Alliance to Stop Slavery (PASS) and founder of Girl Fest, is up against candidates who are already installed upstairs in the Capitol building—experienced officeholders who have demonstrated their electability.

While competing against seasoned politicians places any dark horse candidate at a disadvantage, in Hawaii, the people’s choice may favor the outsider. Tulsi Gabbard demonstrated that a candidate can win on her merits against a well-funded political machine.

Speaking from the activist position in her statement today, Xian differentiated herself from the rest of the herd:

Nothing has taught me more about the heart of liberty than working with those who have lost their freedom." Aiding victims in reclaiming their independence compels me to serve those in need with all of my intellectual, physical, and spiritual energy, and it is that enthusiasm for public service that I hope to make the signature of my time in the nation's capital.

Her announcement also included some good government policy statements that are in line with other populist advocates, for example:

We must look beyond standardized tests to ensure that our teachers are better paid and our children prepared to meet tomorrow's challenges. And we must defend the fundamental right of individuals to participate in democratic governance by increasing campaign spending transparency and making sure that public officials are accountable to the only interest that matters: the people's interest.