Don’t jump to conclusions about UH rankings in earnings survey 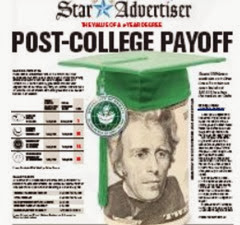 So University of Hawaii graduates don’t make so much money. Nor do graduates of Chaminade, according to a report and story on it appearing in this morning’s Star-Advertiser:

The report ranked more than 1,000 public and private universities based on their so-called earning potential and return on investment to provide "a critical perspective on the relationship between college selection and post-graduation salaries." The report's authors said that attending college is an investment of time and money, and students should be able to choose a school that will pay off in the long term.

Earning potential at Manoa — UH's flagship campus with 20,000 students — ranked in the bottom quarter of regional schools: 74th best of 96 public and private universities on the West Coast.

While one could use the report to dump on UH, which the paper does not do, there is also a possible explanation that I feel should have been emphasized. Since a picture is said to be worth a thousand words, I submit this Google Map: 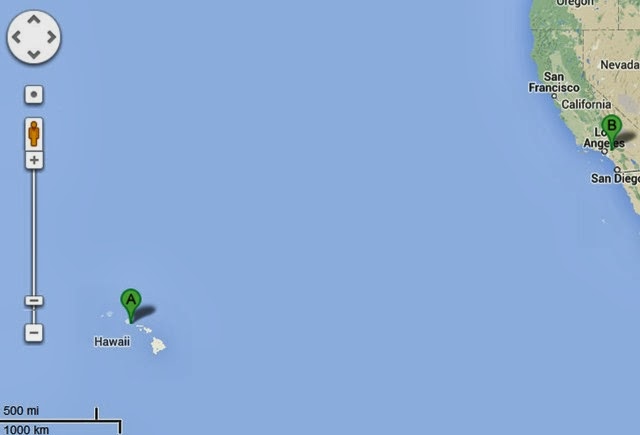 Subject to further analysis, I submit that UH graduates not only don’t have the job opportunities here that would bring them higher salaries, but also have a preference to stay in Hawaii near their families. This preference may be stronger for cultural and other reasons (poverty lowers mobility, for example).

The job situation in Hawaii has proven to be intractable. Often dismissed as part of “the price of Paradise,” in reality there is a pervasive pressure to depress wages even in an area of the country with among the highest costs of living.

When a bill to fund STEM programs in the public schools came before the Legislature several years ago, there was a long line of testifiers supporting the bill. So I submitted my testimony in opposition to gain some attention. I think I may have been the only one to do so. As I explained, I did support the improvement in education that the STEM program would bring, and every kid deserves the best education. My message, though, was that attention also needs to be paid to provide jobs in Hawaii for K-12 and college graduates in order to put that education to use. I did get legislators’ ears, just for that moment.

Then and now, a student graduating near the top of the engineering school at UH, for example, needs to look at leaving the state in order to realize the potential they have earned by doing well at school. If they stay here, they won’t have the same job opportunites. Harvey Mudd graduates simply have a leg up at the higher paying positions right near their campus, which is near LA.

It’s a tough problem. I don’t believe that anyone has found a solution to creating better jobs in an isolated economy so dependent on tourism and hospitality. In fact, through condo conversions and other changes in the industry, valuable union and non-union jobs are being lost even in tourism. We may be headed in the wrong direction as far as job creation goes.

A preference for Hawaii should lead to higher salaries. To keep up with Cost of Living, Hawaii has some of the highest salaries in the US.


I would be interested if you could support that with data. Teachers (and others) have long argued that when cost of living is taken into account, they are underpaid. Certainly, the number of service-level jobs in the tourism industry at at the lower end of the income scale.