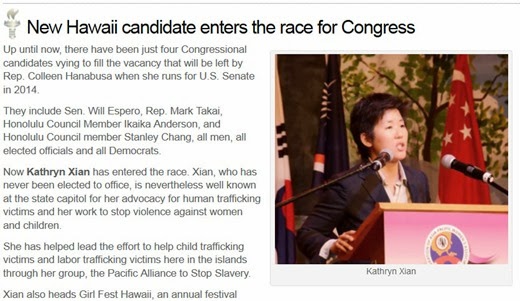 With public approval ratings of Congress near historic lows, even lower than cockroaches or used-car salesmen, it’s encouraging to learn that a person who has earned the public’s respect and trust is running for Hawaii's 1st Congressional District.

If that sounds like an endorsement, it is. Kathryn Xian is Pacific Alliance to Stop Slavery (PASS) Executive Director and also heads Girl Fest Hawaii, an annual festival working to prevent gender-based violence. I know her best from her work on behalf of the Thai and Laotian workers who were left without justice as the federal government’s human trafficking cases related to Hawaii farm labor each collapsed in turn. Kathy can also take credit for bringing Hawaii out of the dark ages by testifying and lobbying for strong anti-trafficking laws.

While others talked, she was taking action. We need that in Congress.

Here is a snip from a Hawaii Reporter article posted today:

“I have dedicated my life to serving the most vulnerable in Hawaii and the time has come to broaden that reach. Protecting our most vulnerable people testifies to my unwavering commitment to public service,” said Xian. “I will help government create policies that uphold the priorities of the people to ensure their physical protection, financial health, and social wellness,” said Xian.

Check the full article for more information and statements about Xian’s candidacy.

It might have been hard to choose among the previously announced candidates, state senator Will Espero, state representatve Mark Takai, Honolulu City Council member Ikaika Anderson, and Honolulu City Council member Stanley Chang. Now the problem is solved. Those experienced and accomplished politicians can simply stay in Hawaii and continue doing what they have done best while we send someone to Congress who is up to the challenge of making things happen.

As the US moves inexorably toward yet another fiscal cliff crisis, I wish that Kathy Xian were already there. She’d tell ‘em what they ought to, no need to, do.

No. She is NOT 'can-do'. Xian failed to get anything passed and failed to address the concerns raised by prosecutors and police. She is a noisy failure.


Ummm...whoever "anonymous" is, he/she is mistaken. (or perhaps has a personal grudge?) Kathryn Xian is certainly an accomplished activist, unafraid to take on the powers that be on behalf of oppressed people. I am GLAD she is advocating for women and children who are victims of sexual exploitation, and GLAD she advocates for victims of labor trafficking as well.