Oahu ratepayers could learn something about social action from the Big Island. They’re not afraid to speak up over there. The video linked below is of a march held on Monday, August 19, 2013. It looks like they had a good turnout.

A tweet came in from Occupy Hilo Media today: 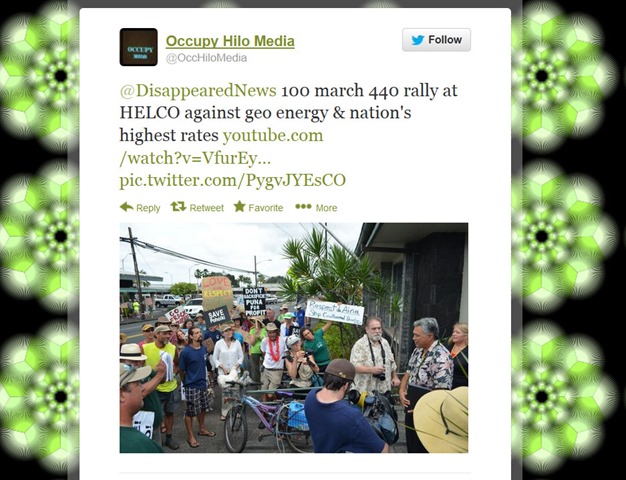 If you click on the thingy at the lower right, it switches to full screen.

Well, Oahu, are we happy with what we pay? When’s the march? Hmm?

Update: In an earlier version of this post, I somehow confused Kauai with the Big Island. Maybe I need more sleep or something…

Thanks for the coverage, please pardon a few corrections.

This occupy group is Occupy Hilo. It, and the sponsoring organization, Puna Pono Alliance, are located on the eastside of the island of Hawai'i, hot Kaua'i.

Second, it is a much broader issue than just high rates, though that is the salt in the wound. it is the safety (actually the hazardous incident history) of the current plant and expansion plans of this industrial development in populated residential/agricultural neighborhoods, and sacrilege to the goddess Pele for Hawaiian Pele practitioners that has people up in arms. The fact that we get about 25% of our energy from geothermal power purchased at around $0.11 per kwh, and that geothermal energy has not lowered our bills at all (while HEI execs make $100,000 per week... per week, yes) adds insult to injury.


thanks for the coverage and please pardon a few corrections:

Occupy Hilo / Occupy Hilo Media, as well as the sponsoring organization, Puna Pono Alliance, are located on the eastside of the island of Hawai'i, not Kaua'i.

Also, the rates are only a part of the story. Some major concerns are the poor track record of hazardous incidents at the existing power plant, the plans for expansion of this poorly regulated industry into populated residential/agricultural communities, as well as the sacrilege done to the goddess Pele to Hawaiian Pele practitioners.

The fact that we have had geothermal power for almost 30 years purchased at approx $0.11 per kilowatt hour, and that it has not ever lowered bills here on Hawai'i island, as well as the fact that some of the HEI execs make over $100,000 per week (yes, per week) just adds further insult to injury.


thanks larry for the correction because we in hilo appreciatepeopleknowing where we are.. we walked the 3 days and i will tell you it was worth ever step


My apologies to everyone on the Big Island who read the earlier article -- I don't know how I got it into my head that the protest was on Kauai.

Anyway, I fixed it.

I guess now I'm still awaiting a protest on Kauai...