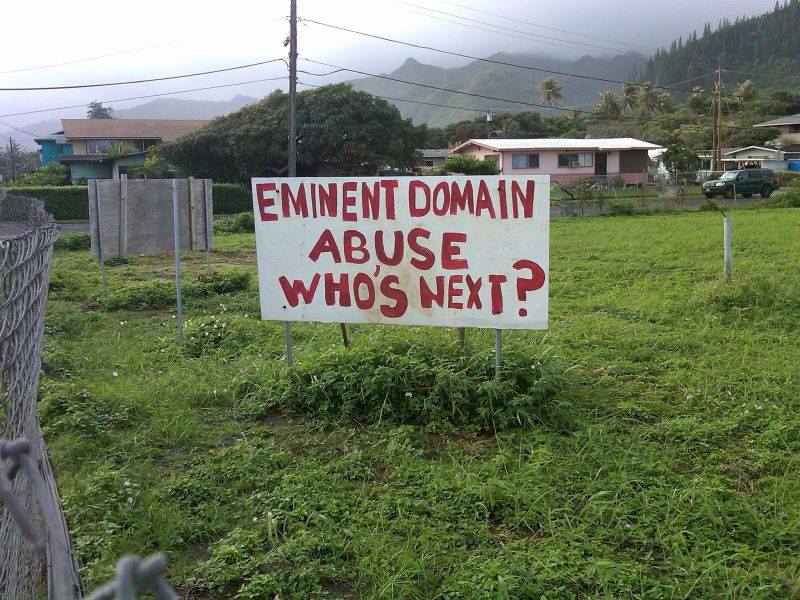 A lawsuit was filed in federal court in Honolulu on Tuesday challenging Honolulu’s use of Bill 54 that authorizes the seizure of "stored" personal property from public areas. The ordinance has been used extensively (and at great public expense) to conduct raids on homeless citizens of Honolulu forced to live on city sidewalks by the City’s closing to them of alternative locations.

In this instance, the complaint (see below) alleges that Bill 54 was used to justify and conduct a raid on the personal property of plaintiff Choon James.

The raid resulted in the removal of signs from a parcel of land that the City is moving to seize by eminent domain, but the complaint alleges that the process is only in progress and so the property does not belong to the City.

From the complaint (see below):

… on May 28, 2013, Defendant City and County and/or Defendants Does, did intentionally enter the property described above without Ms. James' permission. Defendants went behind the fence that partially surrounds the property and posted a removal notice, Exhibit Six, on or near Ms. James' signs.

The suit alleges violation of free speech rights under both the federal and state constitutions since signs on neighboring property were not removed, only these, which contained messages critical of the City’s use of eminent domain. The suit also alleges violation of due process rights, trespass, and several other charges.

The complaint asks for relief (see below, starting from page 15) including a determination that Bill 54, now Chapter 29, Article 19 of the Revised Ordinances of Honolulu, is unconstitutional on its face or as applied to Plaintiff. It asks for a preliminary injunction against further seizures and requests compensatory and punitive damages.

The City’s answer to the complaint will likely indicate whether the City believes it has filed the necessary paperwork to take possession of the land. We’ll keep you posted.

The case was originally assigned to Judge Susan Oki Mollway, but she recused herself citing her longstanding relationship with the City’s Corporation Counsel, Donna Y.L. Leong. The case was subsequently assigned to Judge J. Michael Seabright, who is also handling the (de) Occupy case against the City. The plaintiffs in both cases are represented by the same attorneys.


The document below is an OCRd copy—it may contain errors. Do not rely on it.