“What kind of hypocrite should voters choose as their next leader? The question seems utterly cynical. But, as David Runciman suggests, it is actually much more cynical to pretend that politics can ever be completely sincere. The most dangerous form of political hypocrisy is to claim to have a politics without hypocrisy.”—review of Politcal Hypocrisy by David Runciman

Statistics don’t lie, people lie (thanks, NRA, for that insight). While that’s not difficult to accept, it may be hard to come to terms with the fact that lying and hypocrisy are normal aspects of politics. These days we have a front-row seat as lies are slung in Washington about government spying and about our alleged success against insurgents in the mid-East, so why not examine to what extent dishonesty may lead to distrust. What action does all this dissembling suggest? Can we afford to be mere spectators? 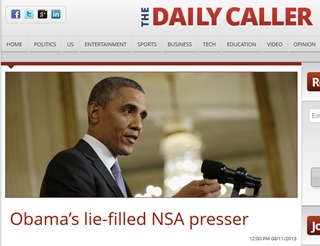 President Obama’s popularity ratings have declined, though that’s not necessarily unusual for a president in his second term of office. But could part of his decline be related to a lack of trust in his words? He has leveraged his oratory throughout his political career to great effect. Now, thanks in part to the Snowden revelations, his words are being tested in the popular press against a reality leaked so slowly and gradually that we have time to absorb its implications and identify the lies.

Part of the genius in the Edward Snowden/Glenn Greenwald approach is that they have not just dumped the NSA pages on the world at one time. They reveal, politicians lie, and the next installment exposes the lies. How perfect.

That presidents lie is no secret—Truman, for example, assured the American people that the cities of Hiroshima and Nagasaki were military targets.

Johnson lied about the Gulf of Tonkin incident—later his Secretary of Defense, Robert S. McNamara, admitted that the August 4, 1964 attack never happened. President Johnson, who was up for election that year, ordered retaliatory air strikes and obtained the permission of Congress to retaliate with military force in Vietnam without a declaration of war.

George W. Bush, just to pick one example because it relates to statistics, announced that the average tax cut he signed into law was $1,089, which was accurate, but he lied anyway. Those who earned more than one million dollars got an average tax cut of nearly $113,000 while the rest of us would receive less than $500.

Clinton’s lies (just a couple in particular) got him impeached.

Now we have the spectacle of President Obama (and others in our government) spouting lies over revelations of NSA spying. Will he or any of the politicians or spy agency heads pay a price for these lies? History suggests they will not. None of his predecessors has done jail time for their lies, there’s no reason to expect a change at this time. Newspapers have also been reluctant to cover the extent of government intrusion, leaving those who would learn more to surf the Internet for information. 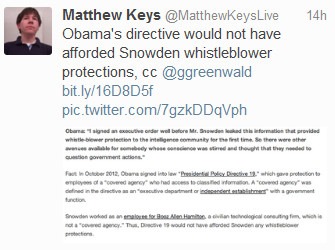 Example 2: Al Qaida is on the run

There’s an obvious contradiction that seems to escape the mainstream media: US embassies and diplomatic missions were closed this past week due to a “credible” threat of an imminent attack by Al-Qaeda. Supposedly this was detected by monitoring “chatter.” How can mere chatter board up US embassies and consulates unless there is irresistible force to back up the words? We’re a “superpower,” don’t forget.

During his election campaign Obama claimed that Al-Qaida was nearly wiped out, and that we were winning in Afghanistan.

“After the death of Osama bin Laden and his top lieutenants, al Qaeda has been decimated, scattered across the North Africa and the Middle East and able to launch only small-scale attacks.”

[at the National Defense University in Washington in May, widely quoted]

It’s been posited that the closings were staged in order to distract from the growing spy scandal and to reinforce that the NSA surveillance program is yielding dividends. An alternative viewpoint is that Al-Qaida is far from impotent—in fact, by force of a few pieces of paper or Internet chatter, it can bring the American State Department to its knees.

By closing the diplomatic missions—in fact, by saying that some might remain closed for the rest of the month—the Administration revealed that the impending death of Al-Qaida may be far less than credible.

It’s unnecessary to enumerate each lie. But lies have a close relative: hypocrisy. At this, Obama also excels. Just three examples to prime the pump for my discussion:

The placid press plays along with politicians by feeding off of their hypocrisy and lies rather than tossing the so-called “hardball questions.” As a result, it becomes hard for readers to discover the truth and act in an educated manner.

The media effectively use the pervasive hypocrisy of government to further their own ideology and for their own profit. The obvious example in recent times is the beating of the drums of war before Iraq, and the New York Times’ own hypocrisy about its promulgation of the WMD myths.

Frankly, both the lies and the hypocrisies have made me angry. I think much of my anger stems from expectations that I held for Obama’s presidency, based on campaign rhetoric which (in retrospect) was part of an award-winning marketing campaign to win votes. Yes, I fell for it, and I’m also unhappy about that.

May the better hypocrite win

So here we are: rather than the ideal of democracy as painted by politicians and pundits, we have the reality. It’s been there all along of course—the willingness of the public to accept and even promote the liars and hypocrites could be the subject of another conversation: while we talk about voting for the “lesser of two evils,” we are, quite realistically, also choosing between the lesser of two hypocrites. (Or does the better hypocrite win?)

Despite my anger, I have to agree with one thrust of the book Political Hypocrisy by David Runciman. From the Amazon review:

Runciman argues that we should accept hypocrisy as a fact of politics, but without resigning ourselves to it, let alone cynically embracing it. We should stop trying to eliminate every form of hypocrisy, and we should stop vainly searching for ideally authentic politicians. Instead, we should try to distinguish between harmless and harmful hypocrisies and should worry only about its most damaging varieties.

For me, I accept that hypocrisy is a fact of politics, though I can’t bring myself to like it (Runciman would not expect me to). I say that because we are constantly implored to support our president and other politicians. I find that difficult to do. I can’t bring myself to cheer for Obama. I think Nancy Pelosi needs to go (if only the voters of California agreed…). Throwing the bums out, however, is not a simple option, because more bums are waiting in line to replace them.

This suggests that contemporary democracy is little different from a monarchy. Runciman discusses Thomas Hobbes and the suggestion that paradoxically  “the King is the people” is as untrue as “the people are King.” But whichever word comes first, it doesn’t matter, because the essential character of the two are in many ways the same.

The book contains insight not to be found in Wikipedia or the modern media. There’s no substitute for scholarly research and explication.

No snip can give the full flavor of the book, but here’s one paragraph in a section describing dialogue at the time of our Founding Fathers:

… Democracy, for Jefferson, was the homespun dress of political honesty, by which the trappings of political privilege might be exposed.

The problem, though, was that democracy was more than this, as Jefferson was well aware. It was also a battle for power, between factions of people willing to deploy whatever weapons were to hand to secure their own advantage. In the early years of the republic, these factions took the form of parties who fought about most things, including the French Revolution, monarchism, democracy, money, and titles, as well as the personal characters of both Thomas Jefferson and John Adams.
[p. 108]

Fine food for thought—at least, check out some of the pages available on the Amazon website if you can.

Some mild (harmless?) hypocrisy from our Founding Fathers:

Jefferson may not have liked newspapers, but he didn’t shut them down. It takes Obama to work at putting reporters in jail or to spy on their phone calls.

Today’s lies involve war, loss of human lives, war crimes, or the welfare of American citizens. How can we remain complacent?

A question for me would be at what point the lies and hypocrisy we are seeing from the White House, from Congress and from the spy agencies themselves have crossed the line, and (because I feel they have already done so), what can citizens do about it?

Another way to look at current events is that our government is working against the interests of the American people. Certainly, the creation of a police state, the bailouts of Wall Street while millions suffer foreclosure, and the willingness of Congress and now Obama to cut corporate taxes while failing to create jobs that pay a living wage, by reducing the social safety net just when they should be strengthening it, could reinforce that conclusion. We’re at odds with our own government. Just recently (thanks to Edward Snowden) we know that we are being spied on by our own government as though we were its enemy.

Sun Tzu once said all warfare is deception in which case the American people seem to be the government’s enemy as President Barack Obama decided to double down on dishonesty when responding to questions from Tonight Show host Jay Leno. When asked about the revelations brought to light by whistleblower Edward Snowden the president amazingly claimed there was no domestic spying program. He claimed instead, after blaming Bush for setting the programs up, that information could only be tracked “that is connected to a terrorist attack.”

Political Hypocrisy is a book I have to read in full one day. For now, I would like to end with one more tidbit, quoted entirely (and unfairly) out of context:

I suggest that a challenge for activists is how to discover the fictions, decide which lies to challenge, and to learn to employ the marketing skills necessary to bring about change and a better democracy.