Alternative headlines for Al-Qaida victory over US embassies

The Obama administration has opened the floodgates for parody headlines by shutting down its own embassies based on “chatter” overheard on the Internet. Below, we’ll try out a few to see if they’ll fly.

If you are a believer, then it seems that Al-Qaida has succeeded in shutting down US embassies in the mid-East and Africa without firing a single shot or expending even one suicide bomber.

Behind the terror alert, if you believe, is intelligence of a threat so powerful that not only have 22 diplomatic missions been shut down until Saturday, but maybe their summer vacation will be extended until the end of August. Meanwhile, the US is out of business in those countries—no visas issued, no weapons sales completed, no coups planned.

Yes, the US has been shut down by what could simply be a cyber prank. Knowing that the NSA is listening, why not whisper sweet threats in its giant ear?

That could be the whole thing—a bunch of kids tweeting in Arabic from their smartphones or laptops. Meanwhile, if they didn’t know the NSA was listening earlier, since they know now, any terrorist worthy of the name is communicating by passing handwritten notes in class or stuffed into fortune cookies where US drones can’t see them.

Sooner or later someone will figure out that Al-Qaida is now able to twist the US around its little finger. Look: with just a few words planted on the Internet, the US 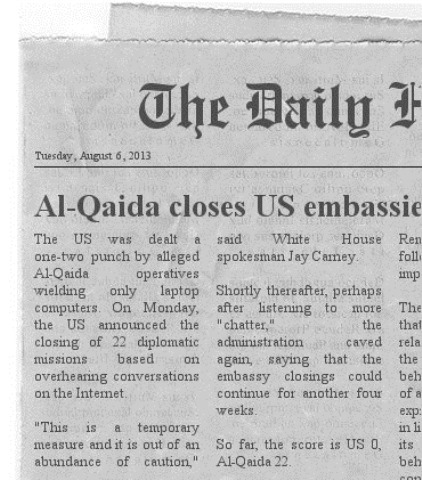 superpower has been brought to its knees, made to close up shop in the mid-East. I’m surprised that Obama doesn’t see the implications of being made to close his embassies.

The popular wisdom in the subservient mainstream press is that this mass capitulation to an enemy that we’ve claimed is losing our war against terror demonstrates that the outrageous NSA spying program revealed by Edward Snowden is justified.

In the alternative press, there’s a thread of disbelief, holding that the Obama administration is staging terror alerts and embassy closings much as its predecessors did in order to win public opinion and get out of a really bad spot with the ongoing NSA spying revelations.

I haven’t seen the suggestion yet, but with all these embassies closed and no personnel at risk, how about a little “false flag” attack to really win the US public over to the side of increased phone tapping? Short of that, any explosion at one or more of the shuttered embassies would certainly generate sympathy.

As the 1964 presidential election approach, President Lyndon Johnson, a Democrat, was being blasted by Republican presidential candidate Barry Goldwater for not being sufficiently aggressive in Vietnam. The Johnson Administration responded by claiming inaccurately that North Vietnamese gunboats attacked a US ship in international waters near the Gulf of Tonkin. Congress passed the Gulf of Tonkin Resolution in October, the US sent combat troops to South Vietnam, and in November Johnson won by a landslide.

It would be foolish for any opponent to go after operating US embassies with sticks and stones, but if one believes the Obama administration, all it took was a few words to hurt them.

So I propose some alternative headlines describing the reality of this capitulation.

The US was dealt a one-two punch by alleged Al-Qaida operatives wielding only laptop computers.

"This is a temporary measure and it is out of an abundance of caution," said White House spokesman Jay Carney.

Shortly thereafter, perhaps after listening to more "chatter," the administration was forced to cave again, saying that the embassy closings could continue for another four weeks.

Taliban said to be studying use of "chatter" weapon

KABUL 6 August, 2013—Following Al-Qaida’s success in shutting down 22 US diplomatic missions using only a handful of cheap Chinese-made computers, the Pakistani Taliban are reported to be studying Twitter, Facebook and other social media as potential weapons against the US.

Dubbed “Operation Feed the Kitty” in translation from Arabic, the plan involves crafting carefully contrived morsels of data to be fed to the “paper tiger” by high-school students pretending they are secret surrogates for Talib leaders.

More along this line:

Al-Qaida can now close any US embassy at will

World's number one superpower brought down by Internet chatter

Al-Qaida closes US embassies without firing a single shot

US embassies at the mercy of mid-East cyberpunks

That mere threats of a filibuster can bring Congress to its knees has not been lost on Republicans who regularly employ that technique as a bargaining chip but have come under criticism for creating gridlock.

Observing how effectively mere words have shut down US embassies in the mid-East and Africa, a new and more clever plan has emerged.

Chatter on the Hill is of course picked up by the NSA wiretapping and can end up on the President’s desk in mere hours. Accordingly, some GOP congressmen plan to resort to simply talking about talking about filibustering.

The harvested “chatter” is classified top-secret, so the public will never know who is threatening to threaten a filibuster, thus sidestepping blame for the tactic.

These are just quick thoughts. Surely some more clever headlines will emerge.