“Imagine that we had the right to control what happens in our neighborhoods here on Oahu. Would we choose to build ultra-expensive high-rise condos with all kinds of zoning exemptions for super-rich out-of-towners?

I don’t think so. But of course, we’re not in control. In fact, by allowing entities such as the HCDA to exist, we cede our power to developers.”

Ok, I’m quoting myself. What the heck. If you haven’t read my earlier article, see A radical idea for Honolulu–community control of land (8/6/2013).

Two comments attached to that article are worth highlighting here (thank you both Anonymouses). The first, in its entirety:

Yes, affordable housing can be built. I noted in the article that NYC still has problems, so that’s not to be ignored, but on the other hand, they are demonstrating that the word “affordable” has meaning there, unlike in Honolulu.

New York City still has regimes of rent control and rent stabilization, though landlords are making inroads against those programs. Honolulu can’t even conceive of that. Any politician who suggested either would be run out of town on their own rail line.

Please read the second comment in its entirety. I’d like to highlight this paragraph as a segue into a discussion of People Power that succeeded:

The problem seems to be that the City (and darn near everyone else) totally disregards and discounts what the Neighborhood Boards say. Developers consider the NBs as an unpleasant hurdle that must be jumped on the track of doing whatever they wanted to do, abetted by private/public entities like HCDA who give lip service to being sensitive to resident concerns but who deal with all objections as matters that are fait accompli.

Stay with me for a moment. I agree completely with the above, and will show that Neighborhood Boards can be (and have been) wielders of People Power.

As to HCDA being sensitive to resident concerns, I loved how they painted up their walls with bicycle-themed art for the “Complete Streets” demonstration in May. Like that really matters. The demonstrations were wimpy—it looked to me like the cute wall paint could have been the biggest investment in the event they might have made. Which is to say, I resent when people paint bicycles on building walls instead of doing anything practical. I can’t be bought for a few buckets of colorful paint.

People Power can and has worked successfully

Yes, the PLDC was repealed. You know about that. (HCDA is still around, though). Let’s go back in time and see how Honolulu residents held developers at bay more than a decade ago.

Let’s check in first at a City Council public hearing in 2002. Laura Brown has the mike: 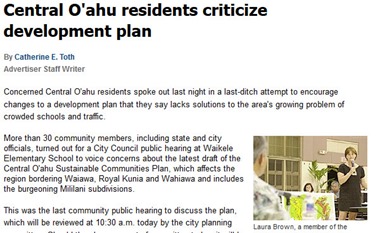 "The only thing this plan sustains is the developer's interests," said Laura Brown, 45, mother of three and member of the Mililani/Waipi'o/Melemanu Neighborhood Board. "We need a plan for an infrastructure. We can't just have houses."

At immediate issue was the developer’s change from 11,445 homes in the original plan to a new draft that added 9,000 more. Schools were already overcrowded and the community was struggling with traffic congestion.

Let’s follow Laura at the battle of Koa Ridge:

Last week, the state Land Use Commission proposed approving two of three phases of the company's Koa Ridge subdivision near Mililani, but only if Castle & Cooke would build schools to support residents before any of the 3,237 new single- and multifamily homes are occupied. The proposal was unprecedented for a major housing project in Hawaii, observers said.
…
The neighborhood board, meanwhile, was the instigator of stronger requirements on developers for adequate schools, "after 30 years of witnessing development continuing and classrooms diminishing," said member Mary Anne Selander.

"The major reason we're doing this now is what they have done to us in Mililani Mauka," Selander said. "The schools have been too small, too late, and this has completely affected the life of all people in this community."

Selander and fellow neighborhood board member Laura Brown say that multitracking (having groups of children take vacation on a rotating basis) at Mililani Middle School has disrupted family schedules, and they fear that Mililani Mauka II Elementary ultimately will have to multitrack because it is being built too small.
…
Selander, whose family was among the first 100 in Mililani, said that "since 1971, Castle & Cooke has been misrepresenting where we were" in school building. "Twice, the community was able to have them stop building (homes) until they built a school."

Selander also blames the DOE for underestimating the number of youngsters expected in schools and letting developers get off light by only donating land and not helping build schools.

Brown said that, over the years, land earmarked by developers for schools has been released by the DOE and "turned into multifamily housing by the City Council."

How about that first sentence? Again: “…but only if Castle & Cooke would build schools to support residents before any of the 3,237 new single- and multifamily homes are occupied.”

Contrast this with current complaints that no schools are available for the 22 condos planned for Kakaako.  So, Neighborhood Board, where is your Mary Anne Selander? Where is your Laura Brown? Why can’t you hold the developer to complete required schools before any of the condos are allowed to be occupied? Hmmm? Those two advocates did their work 11 years ago. There’s a precedent. Study it. Use it.

Again: “Twice, the community was able to have them stop building (homes) until they built a school.”

My challenge: Go for thrice. If the Neighborhood Board can’t figure out how, call up those two advocates and ask them how they did it.

Apparently it has not been unusual for developers to change their plans radically (and against the community interest) as the approval process proceeds. A plan may initially include housing, space for schools and parks, but check in later and the plan morphs: where there was a school, additional housing now appears. Later, if an objection is raised, the developer might propose locating the school in what was to be the park. Oops, there goes the park. But watch carefully, or that space too may turn into housing.

Laura Brown has documented the problems that they faced in Central Oahu.  Here are some snips from her article Damn the Community, Full Speed Ahead (Hawaii Reporter, 11/1/2002):

Under the leadership of Rene Mansho, the City Council approved zoning change after zoning change to convert the number of parks and school lands into additional housing. Unilateral agreements were amended or brushed aside.

Open space under the Mililani master plan has decreased from 42 percent to 10 percent, including gulches. Estimated number of additional homes over and above approved master plan is 1,600, all without any impact fees for schools. The upzoning from Agricultural to Urban land netted the developer billions in increased assets.

Yup, a gulch was used to fulfill the promise of open space. Try kicking a soccer ball around in a gulch.

The deck is stacked against the People at every level in Honolulu, but that does not mean the people are powerless.

Laura recounts the fix, which her advocacy helped bring about:

In May, the Mililani Neighborhood Board 25 and the Sierra Club intervened before the Land Use Commission to either stop the Koa Ridge development or else require adequate infrastructure. The Land Use Commission, in an unprecedented move, added a concurrency condition that schools must be ready before occupancy of homes is allowed.

The Mililani Neighborhood Board 25 action was primarily reactive. They’d had enough. It’s yet another step to taking charge of community planning. That discussion will have to wait for another article.

I want to close with some encouraging words. Now, words need to be carried into action, but still, it’s nice to see an organization pointed in the right direction.

We, the people of Hawai’i, declare

That the 1% has the power until the 99% takes it back.
…
Our people are being pushed off our islands because they can't afford a home for their families; our kids are being robbed of school days while developers are being given handouts; our local jobs are given away while more locals aren't being paid a living wage; our land is being turned over to Mainland developers while our environment despoiled by greed; and our sick and elderly continue to be denied access to the care they need.

We will reclaim Hawai'i for our future!

Check out the Aikeahawaii.org website and their brochure (pdf) from which this was snipped. I love their brochure. See what you think.

Perhaps this relatively new (just over one year old) organization can hit the targets they’ve obviously got a bead on.