I visited the Complete Streets demonstration this afternoon. Cooke Street was closed off from traffic and host to several installations along its length starting from Ala Moana Blvd. It’s important that this was done, and the event (which includes much more than just this street demo) looked like a lot of fun for kids and families (see below my rant for some of the fun). 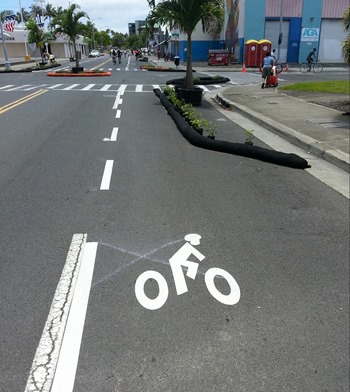 The first thing I noticed was this bike lane marker. Next to it is a strip of white paint with little square reflectors embedded in the surface. Behind it is what I think is called a “bulb-out.” In the intersection at the far left is a little roundabout. Fine so far.

Across the street the bike lane is the same as the parked car lane, though. The bike lane is not continually marked or protected at all (see the Chicago example below). As to the bulb-out, I’m sure it has its uses. There are similar things along the Ala Wai, and I understand residents objected to them. I remember that they impacted parking, which was in high demand, but perhaps there were other objections.
This is the video I originally posted in 2011 showing how Chicago was beginning to install bike lanes.  It’s obvious that they’re serious about it. We’re not.

Without much ado, they provided safe bike lanes.  Imagine that. Why not Honolulu, with great weather year-round? What’s wrong with us? Check out the video and the website that posted it.

(click the thingy at the bottom right for full screen)

At one street corner there were posters explaining the Complete Streets concept. I can’t wait for us to get there. I’ve added some commentary of my own to two posters below, because I think we are far, far away from implementing the ideal pedestrian- and bike-friendly environment that advocates have pushed for all these years. Yes, there is an ordinance now, but no, the City isn’t rushing to implement it. Nor have they internalized the community consultation that should guide their actions (as evidenced, at least, from the sidewalk narrowing at Thomas Square and the inadequate response to Honolulu’s pedestrian death toll).

The two posters and my response to what the City actually does (keep in mind that the Complete Streets ordinance, 12-15, is already in force): 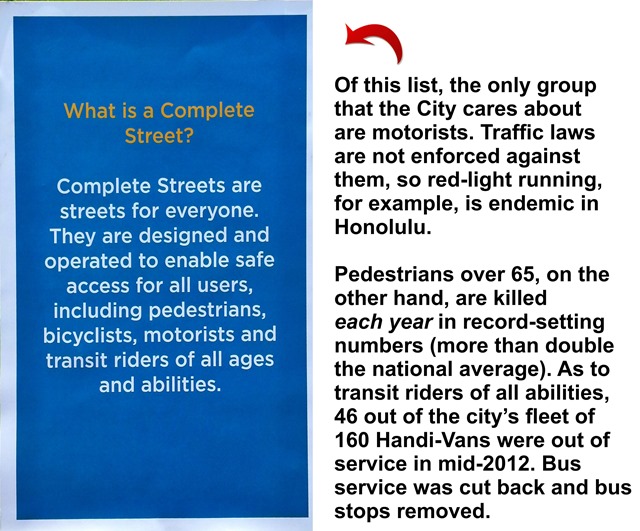 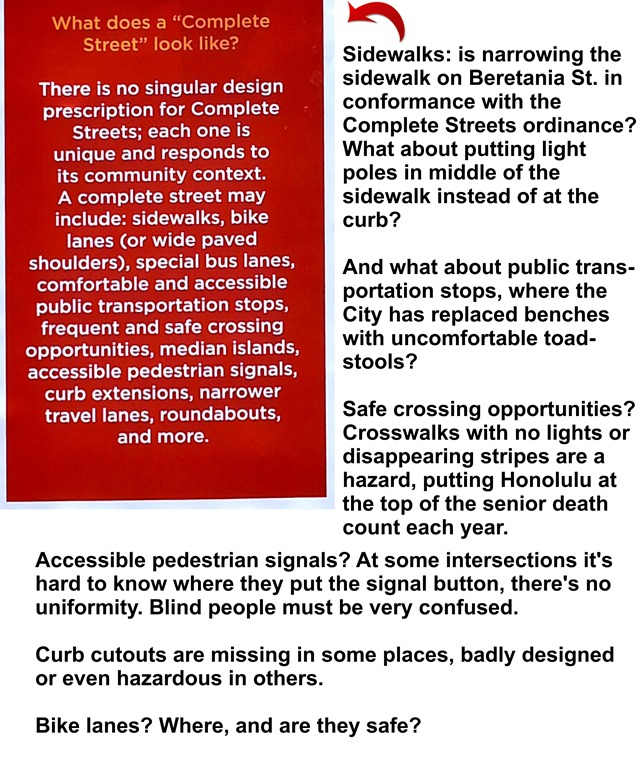 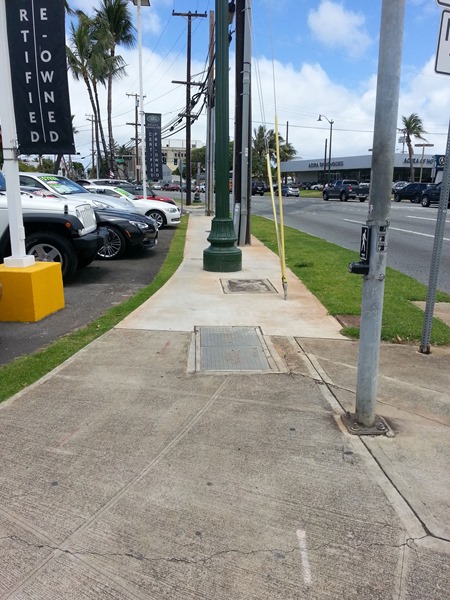 Speaking of sidewalks, stepping back and right around the corner from my first pic of the bike lane above, is an example of the light poles that the City has installed smack in middle of the sidewalk on Ala Moana Boulevard. The electric pole behind it is actually quite close, as you can see from the guy wire with yellow protector sleeves.

Note also that the design chosen for the base of the pole is particularly wide. There are better choices if one cares about pedestrians. Does this light pole beautify Ala Moana Boulevard? I don’t think so.

From the Complete Streets ordinance:

Under this policy, the city hereby expresses its commitment to encourge (sic) the development of transportation facilities or projects that are planned, designed, operated, and maintained to provide safe mobility for all users.

The installation of light poles in middle of the sidewalk does not provide “safe mobility” for anyone, but in particular is a challenge to those in wheelchairs or scooters.

Speaking of wheelchairs, here’s the same pic of that corridor along Beretania Street fronting Thomas Square that I’ve run before. One would not want to be in a wheelchair entering at one end if another wheelchair user had entered at the other. 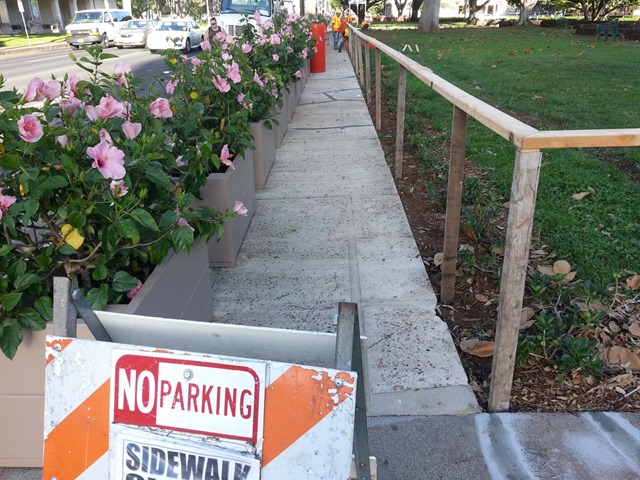 Ok, I said there was fun. First, I noticed that there were public toilets (portapotties) installed in a couple of locations. Not exactly fun, but a pleasure. Perhaps a measure of the level of civilization of a city is recognizing that people need to have access to public toilets and then providing them as appropriate.

There was a tent where bicycles were loaned for free—just leave an ID and credit card. What a great idea, considering that visitors typically arrived by car or bus. There were several other tents: AARP, The Outdoor Circle, Fisher Hawaii, just to name a few.

A bicycle shop displayed a rack of bikes out front. One had a price tag of $579 dangling from the handlebars. Yikes. When I was a kid I think a bike went for $30 or something like that. Those were the heavy ones. A 3-speed “racer” could cost more, but not $579.

Walking up the street I was passed by this “bar bike” zipping along. There’s a counter down the middle—patrons sit on both sides of the counter, order a drink, and operate the pedals as it zips along. A true alcohol-powered vehicle, and it was moving at a good clip. 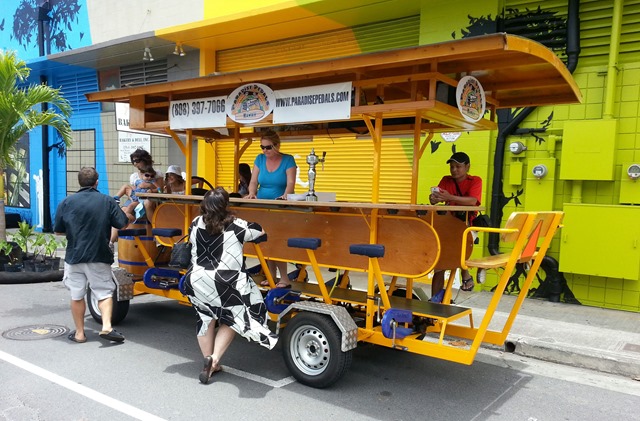 There were food trucks. There was some outdoor chess: 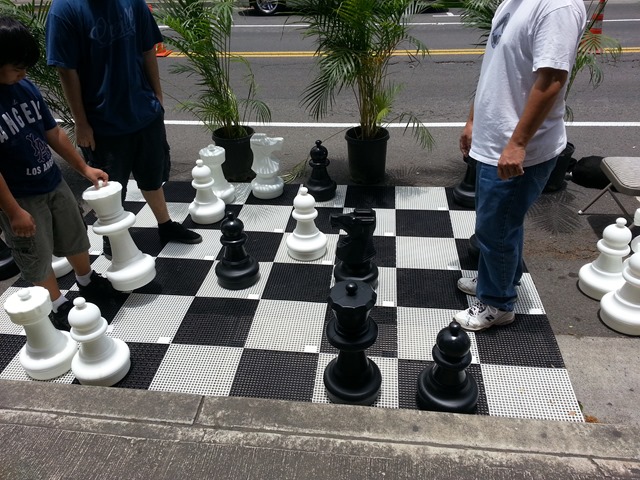 The street in front of Taste Table on Auahi St. was converted to an al fresco dining room. We could use more of that in Honolulu, considering the great weather. Each table was set with wine glasses and a bottle of wine. 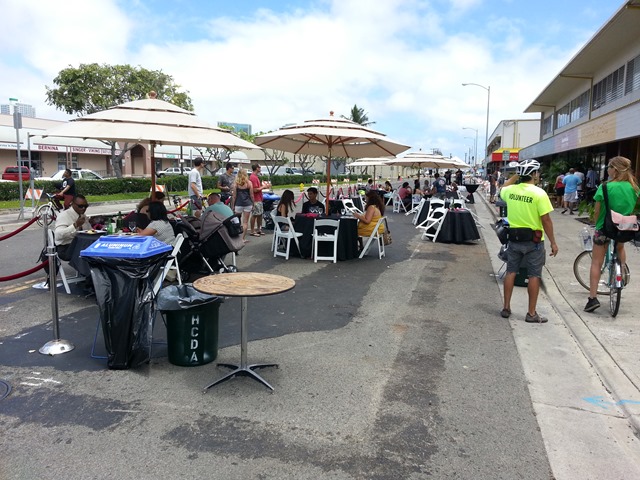 One last pic. I actually took this one in town, at a bus stop. This guy seems to have been waiting for a long, long time… and he was thoroughly plastered. 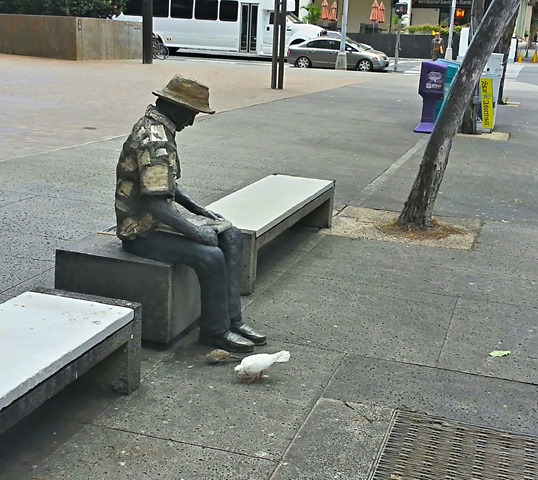 What would you propose instead, Larry? We're looking at doing a full two-week demonstration in October (minus the fun). We'd love your input.


Fun is ok, but I've been to places like Portland and am impatient for Hawaii to take those first steps. It could wait for October, but it doesn't have to. I would suggest showing people what other places have successfully put in place. And do it over and over. Consciousness raising, and that's only step one.

I don't claim to know what's best, but I do have my own thoughts.

Why look at other places? In one sense we really are an island. People here may think the DOT is doing a good job for them, but evidence shows the opposite (sure, it's not just the DOT). If they could see the results that some other places have achieved, it could raise expectations for Honolulu.

Portland often comes to my mind and I've written about it a couple of times, but this is only one small blog.

Chicago put in bike lanes -- colored green, protected. Safer for bicyclists. You likely know of far more success stories than I do.

I've lived here for some time now, and little to nothing has been done about the death trap pedestrian crossings. I witnessed the paint disappear on the Metcalf street bike lane (which runs down the center of a two-way street), and called the City about it because of the obvious hazard, but nothing was done. When a crossing button was out of order on Vineyard Blvd., endangering those who rushed across anyway, I called myself and applied pressure to get it fixed after finding out that others reported they had called to no avail (it was fixed within hours).

I've visited places like Rockville, Md., which had a speeding problem near some schools and moved to fix the problem expeditiously. We still don't interfere with speeders or red-light runners.

So where I'm coming from is that we need to get off the dime on Complete Streets. It's not bulb-outs, it's a question of how best to get our city and state governments to put in place real reforms ...

... as other cities have done.