After this screaming headline on Saturday, the Star-Advertiser ran one of its silly polls yesterday asking readers (who had just seen their giant headline) what they thought of the police pay increase. Unsurprisingly, this journalistic nonsense yielded a preponderance of those who thought the pay raise was too much (64%). Interestingly, despite their uncritical parroting of city propaganda, 36% of poll respondents felt that the pay raise was too little or just enough. 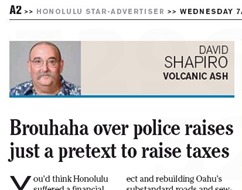 Leave it to David Shapiro in today’s paper to call the City on its gambit. There was nothing stunning about the police pay increase except Saturday’s headline, it seems. A snip:

It's hard to tell if they're trying to balance the budget or win an Oscar for best dramatic performance by tax-happy politicians.

The city's $2.16 billion budget for fiscal 2014 included $40 million for police pay raises on the mayor's and Council's belief that officers would get 4 percent a year — the same amount won by the Hawaii Government Employees Association and United Public Workers.

The award of 4.2 percent was a bit more than expected, but do Caldwell and the Council expect us to believe that after absorbing 4 percent for the much larger HGEA and UPW, a 0.2 percent surprise for a smaller union creates a tax-raising emergency?

This isn't about paying police, but about creating an excuse for more taxes to pay for big looming expenses like the $5.26 billion rail project and rebuilding Oahu's substandard roads and sewers.

David’s column alone is worth the price of the paper. Ok, I like the comics also. Seriously, because of the paywall you can’t read his column without a subscription, but you can steal a peek at it at a library, on the bus sometimes, in your doctor’s office, or while waiting on line at the supermarket checkout. One way or the other, read Volcanic Ash. Let’s see if the Star-Advertiser editors do.

Larry, you know this and Dave knows this. The construction money for rail by law can only come from two sources, the FTA and the half percent excise tax. The city cannot and will not raise property taxes to build rail. On the other hand what's wrong with raising taxes to fix our infrastructure like roads, sewers or water mains? The half percent rail excise tax by law cannot be used to fix those things, and even if the construction of rail were cancelled the legislature will not use the money for those things. In other words were Ben Cayetano elected Mayor he would be facing the same budget problems as Caldwell with no hurricane fund and state retirement fund to withdraw from to balance his budget.


I have to deviate from your points (which are good ones) to say that we don't know what the City will do to pay for rail. As to the roads, etc., and again, I know I'm not exactly on your point, I don't believe that our money is being used to best effect. While the City seems willing now to pour money into potholes, that's not the best use of technology. The City's repairs, the ones they have done, are expensive and have not lasted. I still feel that an outside expert should advise the City on how to spend its road repair money. It will likely turn out, as one person with at least a little expertise told me, that we have the worst road maintenance in the... and he was interrupted before finishing his sentence. Probably, he meant worst in the country.

We are likely wasting shovelfuls of money and need to stop that first, if true.

Perhaps we need to raise taxes, or perhaps our taxes are high enough and are not being well-spent. Look at how Caldwell is willing to spend over a million on raids of the homeless instead of putting people into homes.

At this point, I don't trust the City to manage its finances (our tax money) wisely, and I don't believe they will be able to pay for rail expenses in the future without finding new sources of revenue. What is law today can be changed tomorrow.

But then, I'm not an expert either. I could be off base, or maybe not.


The comment from Old Diver ignores that the cost to operate rail will necessitate an increase in property taxes. pretending to only see capital costs and not the humongous ongoing operating costs is the stuff of HART PR flacks.

Shapiro is absolutely right that this whole kabuki is a ploy to move the agenda of higher property taxes.


Not ignored. The O & M for rail, bus and handivan is estimated to be around 19% of city revenues when rail begins full service. What is not mentioned is a bus, handivan only system will have an O & M cost of around 23% of city revenues during the same period. The reason for this is by 2030 80% of Oahu's population will be within 2 miles on either side of the rail route, and a bus only system will have to be greatly expanded to meet the additional transportation needs. The bus currently has over 1800 employees while rail will employ 300 workers. The cost per passenger mile for rail is 40 cents while bus is 77 cents. Between 2020 and 2030 the O & M for rail will increase by 20% while the O & M for buses will increase by 40%. The fact is Honolulu can't afford not to build rail. The Kabuki actor of misleading information is Dave Shapiro.