The latest leak of NSA documents reveals that analysts can easily spy on anything anyone does—simply by filling out forms—which is so easy that anyone can do it.

XKeyscore allows NSA analysts to search at will through emails, online chats and the browsing histories of millions of Internet users. And no, no court order is needed to do this. Here’s one form. The Guardian article has examples of others. 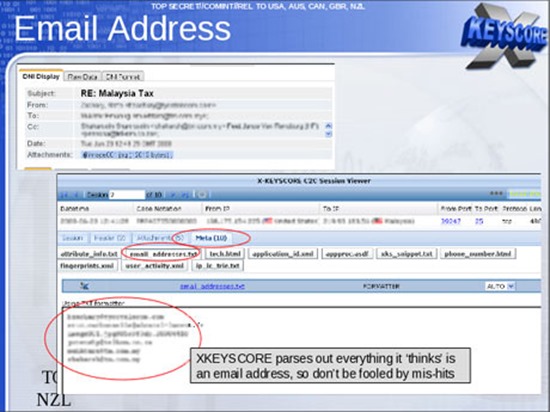 "I, sitting at my desk," said Snowden, could "wiretap anyone, from you or your accountant, to a federal judge or even the president, if I had a personal email".

US officials vehemently denied this specific claim. Mike Rogers, the Republican chairman of the House intelligence committee, said of Snowden's assertion: "He's lying. It's impossible for him to do what he was saying he could do."

But training materials for XKeyscore detail how analysts can use it and other systems to mine enormous agency databases by filling in a simple on-screen form giving only a broad justification for the search. The request is not reviewed by a court or any NSA personnel before it is processed.

No doubt there’s more to learn, but this installment suggests that intelligence leaders have been lying to Congress and the American people about the extent of their spying and the capabilities of the systems they have developed and deployed.

With analysts spread all around the country, there is a new class of people able and equipped to learn everything about everyone’s use of communications. From today’s Democracy Now, this observation by Julian Assange:

There is no shelter, except in numbers—the likelihood that a Snowden clone is reading this blog post may be small. And this is posted on the open Internet anyway.

But those same people can check that you are reading this, if they wish. Again, your only protection is being an insignificant one of millions of people out there, and still, any of us may be entered into a dossier somewhere.

Assange is hopeful, though, that this kind of system cannot be sustained:

And we have a situation now where young people, like Edward Snowden, who have been exposed to the Internet, who have seen the world, who have a perspective, who have seen our work, the work of—allegedly of Bradley Manning and others, don’t like that. They do not accept that. They do not accept that the U.S. Constitution can be violated, that international human rights law norms can be conspicuously violated, that this information apartheid exists. That system cannot continue. We even saw Michael Hayden acknowledge that in an interview in Australia recently, that in order to function, the National Security Agency, the CIA, and so on, has to recruit people between the ages of 20 and 30. Those people, if they’re technical and they’re exposed to the Internet, they have a certain view about what is just. And they find that they’re—in their jobs, the agencies that they work for do not behave in a legal, ethical or moral manner. So the writing is on the wall for these agencies.

If caught I will admit to clicking on the Disappeared News Site but will never admit to reading it.