Is dehumanizing the houseless the very best we can do for them??


“Some of the people of Honolulu- I’d say the majority, judging by many comments here and elsewhere- disgust me more than any “smell of urine and feces” or “visual blight” ever could.” Your “shelters” are little more than nightly prisons. It’s up to you to stop whining and find real solutions- stop punishing people and hoping they’ll just “go away.” Dehumanizing the houseless of Honolulu dehumanizes you, not them.”

The pull-quote above is a comment by Kauai blogger Andy Parx to an article on Ian Lind’s blog, City continues to “seize and destroy with impunity the worldly possessions of a vulnerable group in our society” (ilind.net, 7/7/2013). For a short time after Andy posted there was silence on that thread, then it began again.

I agree with Andy on the dehumanizing process that is going on here, and I’m glad he called it. Paola also is both perceptive and not afraid to speak the truth.

As long as the media (particularly our daily paper) run letters to the editor primarily complaining about the homeless as eyesores, nuisances etc. without any understanding that the situation on the streets is entirely a product of the city’s punishing raids and other restrictive measures, and that evidence-based approaches to providing housing and services to those in need are absent in this town, little change in attitude can be expected. Also, little pressure will be exerted on the City Council and on the mayor to do the right thing as long as people without homes are treated as vermin.

There’s a graphic going around on Twitter which is worth posting here (I can’t find where it originates, but here’s one url on the web): 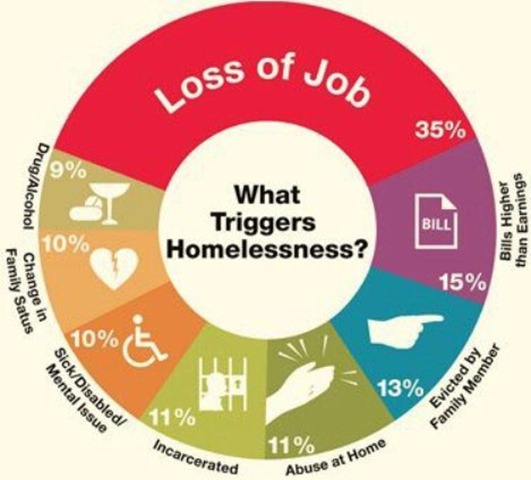 I don’t know if this would accurately represent the triggers in Honolulu, or how it might be related to length of time without permanent housing or to the static number of people on the streets. But have a look at it anyway.

The graphic should remind us that in Hawaii, jobs pay pretty low wages to start with, and if those jobs disappear, former wage earners and their families are still stuck with our high cost of living. Affordable rental opportunities are almost non-existent.

Yes, there are families and children living on beaches and on the streets, in very poor conditions. It is not by choice that they are there, and the cruelty with which the Honolulu City Council and its mayors treat them by no means resolves their situation.

Expect more attacks on the homeless. It will probably take a federal judge to change the city’s behavior. In Hawaii, when it comes to the disadvantaged, whether special needs students in the schools, adults in the state’s mental hospital, prisoners not getting treatment, lack of sidewalk cutouts for those with disabilities, dialysis for COFA residents, and now illegal confiscation and destruction of the personal property of those living on the streets, it seems we need the feds to replace what should be our collective conscience.

Aloha Larry,
Thanks for another great article. I'm surprised to see that even though many apathetic people will claim that it's drug/alcohol abuse that leads to homelessness, this graph shows that while that is a factor it's comparatively lower than other factors.

What's going on in Hawaii is that while our minimum wage meets the Federal amount ($7.25), it still doesn't help to bridge the wealth gap. Our dependency on the United States and petroleum means that everything here is inflated and expensive, necessitating that every adult earns at least $13 an hour to afford to live.

We're in the lowest bracket of wages and highest bracket of costs of living. The poor are f%@#in poor while the rich are f$#@in rich.