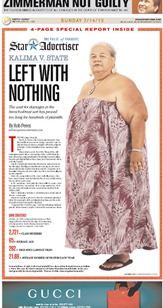 I’m glad to see the Kalima trial on the front page of today’s Star-Advertiser, which carried the story on a four-page supplement inside.

Now we need a continuation—one with more words than pictures. The written article is long on basic facts and short on the sense of utter neglect and injustice that came out almost every day of the long hearings in 2009.

While the over-large images have a certain impact, without the narrative, the issue will be forgotten in a short time. And what an irony that a front page story, headlined “Left with Nothing,” is sponsored at the bottom by Gucci.

The article gives no sense of the  the opposition of the Cayetano administration and his Attorney General to the program, which emerged once again at a hearing for the damage phase of the trial.

The captions under the oversize pictures of some beneficiaries denied their trust awards is no substitute for their words. Simply noting that Irene Cordeiro-Vierra waited 29 years for her award does not replace her own personal story. Cordeiro-Vierra lived on the beaches while waiting for the State to approve her application. She said, in an interview several years ago:

"Now I am 82 years old, I get letters from Hawaiian Homestead now saying I have homes you can apply for, I am not capable anymore.”

Judge Eden Hifo rendered her written decision on November 3, 2009, ruling that the State of Hawaii breached its trust obligations and was liable for the delays in receiving homesteads by the beneficiaries.  She has since retired from the bench. The next step, barring an appeal by the State, was to be the damage phase. But the State is demonstrating that it has no intention of settling any time soon, if ever.

Judge Virginia Lea Crandall seems not to understand the material before her and is allowing the State to re-argue some of the points settled at trial, which is sure to prolong the wide-spaced hearings. For example, during the trial phase, one witness testified that she could have qualified for a mortgage while she was working, but she was held so long on the waiting list that she was no longer working when she got her offer and could not then qualify for a loan.

The trial had already established that there was no requirement that a beneficiary take out a loan. A beneficiary could have passed the land on to their descendants, for example.

Even though that matter had been settled at trial, plaintiff attorney Carl Varady had to remind the court of the basic requirements of the law:

There’s nothing that requires beneficiaries to borrow, to invest themselves, and there’s nothing that says they have to build a structure to occupy. … There are no financial qualifications to receive a homestead lot. … Occupancy is not building. Occupy means to occupy. That’s all it means.

[The purpose of the Act] is rehabilitation. To rehabilitate. … It’s not to reward people whose middle class or upper class circumstances provide the financial wherewithal to get private funding.

Beneficiaries described during the trial that after having waited decades for their award, they were offered land so far in the boonies that there would not be infrastructure necessary to build a home or farm the land. Others were shown inferior plots but not allowed even to enter the unimproved land. Some land offered was not suitable for farming, or of exceedingly low quality.

Under Governor Abercrombie, the Attorney General’s office continues to delay settlement. For example, the AG filed a flock of motions, over half of which were denied in the damages hearing held in August, 2012.

At the leisurely pace these hearings are held, the sadness, the unfairness, the State’s criminal neglect, are sure to continue on into the indefinite future. Abercrombie appears to be intent on passing the expense of settlement on to his successor(s).

To the Star-Advertiser and reporter Rob Perez: I’m very glad that you devoted this much space to the Kalima trial. Now please go back and give us the words of the Native Hawaiian beneficiaries who can explain to your readers the travesty of justice that the State of Hawaii continues to perpetrate against Native Hawaiian trust beneficiaries.