Guardian: NSA accesses all of your Google, Facebook and Apple data

More bad news for the Obama administration (and for civil liberties and what’s left of American democracy, of course). A new revelation by the Guardian newspaper reveals data collection so broad that each of us is caught in the net.

The NSA access is part of a previously undisclosed program called PRISM, which allows officials to collect material including search history, the content of emails, file transfers and live chats, the document says.

The Guardian has verified the authenticity of the document, a 41-slide PowerPoint presentation – classified as top secret with no distribution to foreign allies – which was apparently used to train intelligence operatives on the capabilities of the program. The document claims "collection directly from the servers" of major US service providers.

As this and other articles explain, while the phone data was apparently “metadata” only (though how can we be sure?), by accessing servers directly, the NSA has your actual emails, files you’ve transferred, and so forth. Yes, yours. And mine. And maybe even Obama’s, all of Congress’ emails, and so forth. Everyone’s communications. 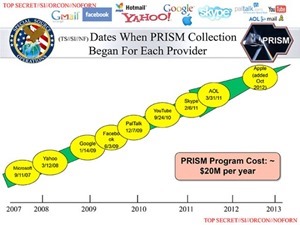 According to the reports, Microsoft was the first to cave in, granting access to the government starting in 2007. The report identifies eight companies. Each has denied the report. Twitter is notably absent. See: Twitter boosts its privacy cred with its absence from the NSA’s surveillance program (qz.com, 6/6/2013). On the other hand, maybe they just forgot to include Twitter on the slide (click the image for larger).

Here’s some of what [former NSA crypto-mathematician William] Binney guessed at back in December:

The FBI has access to the data collected, which is basically the emails of everybody in the country.

[qz.com, The NSA whistleblower who guessed exactly what was going on, six months ago, 6/6/2013]

There are those who insist that they have nothing to fear, so they don’t care if the FBI or the NSA has their data. The data is shared, and Hawaii has a “fusion center” for exactly that purpose—to share information among all levels of “law enforcement.” So the HPD might know exactly what you have been downloading on weekends. Or they might confuse you with someone else with a similar name, and then a traffic stop or airplane ride could turn out to be a nightmare.

Of course, the Obama administration will be hard at work as a result of these revelations—not to stop the abuses of the US Constitution and our civil rights, but to locate and prosecute the whistleblower or other source who passed the information to reporter Glen Greenwald.

Since Greenwald lives most of the time in Rio de Janeiro, which is overseas, and since the Guardian is in London, both can expect that their phones and messages will be tapped. Worse… they might watch the skies for one of Obama’s drone missiles coming down their chimneys—clearly they are enemies of the State. What to do about it is something else. One way or the other, the whistleblower(s), Greenwald and the Guardian can expect some retaliation.

As to Obama, if the House has been looking for something impeachable, this might be it. Or, more likely, they’ll join in the hunt for the whistleblower.

For the rest of us, this growing scandal adds a couple of bold marks to the score sheet. Obama has visited the sequester on us, and most recently he has opposed women’s access to safe birth control—see, for example, Judge slaps Obama administration again over birth control restrictions (Washington Times, 5/13/2013). And no, he hasn’t taken any action to close Guantanamo. He is deporting people at a furious rate, prosecuting users of medical marijuana, pulling hundreds of thousands into the criminal justice system by aggressively prosecuting marijuana possession, and threatening whistleblowers with Espionage Act penalties in record numbers. He proposed cutting senior citizens’ incomes all by himself, it wasn’t even a compromise with Republicans.

Remind me what there is to like about this guy.