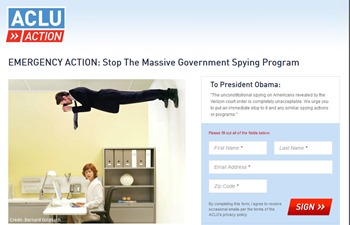 If you’re angry enough and believe in petitions, here’s one prepared by the ACLU. You don’t have to be a member to sign.

OK, so everybody on planet Earth now knows that the NSA and others access every single telephone call and snoop all the internet traffic.

Let me ask...since now everybody knows the jig is up, will the government stop the snooping? What do they hope to get when all the bad guys know their communications are being watched?


Of course they won't stop the snooping. They'll look for the whistle-blower and punish that person as much as they can get away with.

The real bad guys have no doubt figured out how to communicate secretly anyway. Overwhelmingly, the snooping will create dossiers on ordinary people.

Yes, dossiers and if it gets shut down the dossiers will lay in wait for the next compliant administration to be used against someone when it suits their purposes, like patsies.

Theyʻre building a treasure chest of patsies. People to publicly massacre if their profile fits to take the blame for government murders.

There google, did you get that? Do you feel right about this? And what if itʻs you, google, that gets named PATSY OF THE YEAR someday?