Scott Foster of Hawaii Advocates for Consumer Rights has released a video of the late legendary Hawaii labor leader Ah Quon McElrath addressing a meeting of Kokua Council in the year 2000. This is a must-see, especially if you knew AQ. For me, it was like a time machine.

There’s more information below from Scott’s statement accompanying the release.


Click on the thingy at the lower right for full screen.

After more than a decade, a particularly interesting 50-minute video of the legendary Hawai`i labor leader,  Ah Quon "A.Q" McElrath has been located. Scott Foster, the Communications Director for Hawai`i Advocates For Consumer Rights said, "While looking through the literally hundreds of old VCR tapes of programs I've produced in Hawai`i through the years, I found this priceless tape of A.Q. I had simply forgotten about it. Union member or not, those who had the good fortune to know and be mentored by her will rejoice seeing this video, now digitized and archived on line for all time."

The Labor Movement in Hawai`i; Then and Now

Beginning with the coming of Captain Cook in 1778

The social and economic impacts of unions in Hawai`i

This historic program was presented at a special July, 2000, Kokua Council of Seniors luncheon. The Kokua Council is one of the oldest organizations of its kind in Hawai`i -- with a proud history of advocating for significant social-justice issues affecting kupuna, kamali`i and their families. The original event and this video production were sponsored by Scott Foster & Associates and Hawai`i Advocates For Consumer Rights. The original raw video was shot by Jeff Garland of Digitaleye Hawaii. 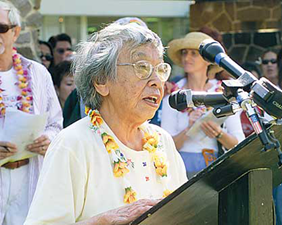 At the time of her death at 92 in December of 2008, much was written about Ah Quon McElrath. The Honolulu Advertiser article, "Labor Champion Dies: She taught us to take risks, take care of others" reads:

"Ah Quon McElrath, who helped shape the history of labor and social justice in Hawai'i, died Thursday at Kaiser Moanalua Medical Center. She was 92. The diminutive McElrath - known to most as simply "AQ" - helped organize the International Longshore and Warehouse Union in Hawai'i in the 1930s, and dedicated her life to community service, education and improving the welfare of the working class and poor.

'She was a lifelong champion of the underdog and an eloquent, irrepressible and forceful spokesperson for labor, human rights and progressive causes,' said Bill Puette, director of University of Hawai'i-West O'ahu's Center for Labor Education & Research.

'She never hesitated to challenge the male-dominated leadership of the unions and force them to look beyond salary issues and to go after standard-of-living improvements like occupational safety, ethnic equality, healthcare and education.'
ILWU International President Robert McElrath yesterday called her death 'a loss to workers everywhere. AQ was part of the early generation of ILWU leaders who fought hard for working families on the docks, in the fields, in factories and hotels,' he said in a statement.

ILWU Local 142 President Fred Galdones described McElrath as 'the conscience of the ILWU and our moral compass.'"

Mahalo for sharing this!


What a privilege it was to hear AQ speak!