Game changer: Plastic, home-made guns would stymie gun control laws even if we had them


“On May 1st, Wilson assembled the 3D-printed pieces of his Liberator for the first time, and agreed to let a Forbes photographer take pictures of the unproven device. A day later, that gun was tested on a remote private shooting range an hour’s drive from Austin, Texas, whose exact location Wilson asked me not to reveal. The verdict: it worked.” 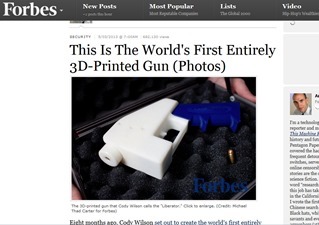 It’s not just guns that can be made by anyone with access to the right kind of 3D printer. Banned or soon-to-be banned magazines and other gun parts can be easily reproduced:

Since it was founded last August, Wilson’s group has sought to make as many components of a gun as possible into printable blueprints and to host those controversial files online, thwarting gun laws and blurring the lines between the regulation of firearms and information censorship. So far those pieces have included high capacity ammunition magazines for AR-15s and AK-47s, as well as an AR lower receiver, the body of that semi-automatic rifle to which off-the-shelf components like a stock and barrel can be attached.

Those early experiments have made Cody Wilson into one of the most controversial figures in the 3D printing community.

So to heck with the Second Amendment. The First Amendment would seem to guarantee any American (of any age!) the ability to read how to make a gun out of ABS plastic that will pass through metal detectors. Kiddies, if your parents don’t own a 3D printer yet, perhaps someone in your neighborhood does have one.

The way it works, by the way, isn’t rocket science. A relatively small computer file contains the directions to make the intended item. That file is sent to the 3D printer in the same way you might print a document from your word processor. The printer, loaded with ABS plastic, begins to operate. Since it is laying down a 3D object, it takes some time, but there’s no need to stand around watching. Come back later and your project is complete, in all its 3D glory. Want another? Just print the same data file again. Piece of cake. Does your friend want one? Easily done.

The gun control stalemate in Washington is certainly contemptible, but what if a law wouldn’t matter anyway …  ?  The Forbes article describes a first attempt at making a printable, plastic gun, and although we have nothing yet to indicate that the device will be long-lasting or effective, or that it won’t blow up in a user’s hands, it’s at least a proof-of-concept.

Printing guns locally could also be a game changer for gun manufacturers. It may affect their product lines, pushing them toward the larger, more deadly items. Meanwhile, plastic guns would evolve. I can even imagine custom decorated guns. A Hello Kitty design as a present for mom? Easily done. A special Davy Crockett model for the kid brother? Why not. It could get ugly very quickly.

In this country or elsewhere, should home-printed guns become feasible, we are going to see many, many more people killed by gun violence.

3D printers are poised to proliferate

These two photos are several years old. Current models, whether commercial or make-it-yourself, are much more professionally designed. I included these two photos to give an idea of the accessibility of the process. We’re talking hundreds of dollars for a home-use printer (that probably can’t make a gun today, but might be able to do it tomorrow…). That’s hundreds, not tens of thousands of dollars. 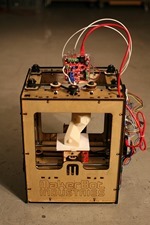 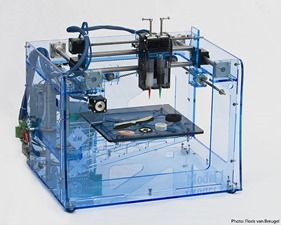 I would love to have a 3D printer—just to replace some of the cheaply-made items that have broken around here. I could make replacements by myself. There are even 3D scanners that can help make an exact copy. A 3D printer can even make objects that have moving parts. Try googling for more information.

I could try my hand at making some 3D art. And I promise, no guns. But others may be intrigued with the power to make their own firearms, or to start a home gun-printing business, legal or not legal.