When Microsoft announced Vista, it appeared the new operating system would be a leap ahead of the workhorse version Microsoft XP. It didn’t pan out—many systems administrators stuck with XP because it was reliable, and Vista was not. So the next version, Windows 7, was greeted with enthusiasm. Basically, it was Vista done right, more or less.

Now comes Windows 8. Microsoft is clearly lagging in ingenuity behind both Apple and Google, which have produced operating systems for smartphones and tablets that have proven wildly popular. Windows 8 supports touch screens and “apps” just like the others, but isn’t catching on.

So how is it going? Not well, it seems. One of our computers may be nearing the end of its life, and the thought of having to buy a Windows 8 system is discouraging. Yet all new desktops on store shelves feature Windows 8. Yes, Linux is an option if one hates Windows 8 or wants to prolong the life of an older system.. Not only does it work really well, but there are programs that fully substitute for popular Windows standbys. Additionally, some Windows programs can be made to run on Linux systems.

Googling around on the web, I see articles on how to downgrade a Windows 8 system after purchase. That adds additional cost since the substitute operating system has to be purchased separately.

As I noted before, Office Max ads have begun to show blank screens on desktop and laptop computers  in their weekly ads (see: Erasing Windows 8?, 4/14/2013).

Recently, Office Depot has begun to do the same: 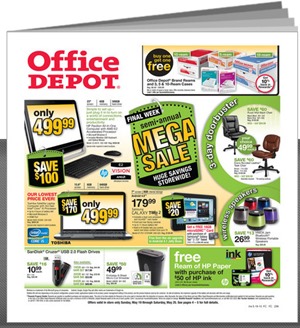 Office Depot shows a blank yellow screen instead of the Windows home screen. Maybe not the best color to use, but obviously a deliberate choice. 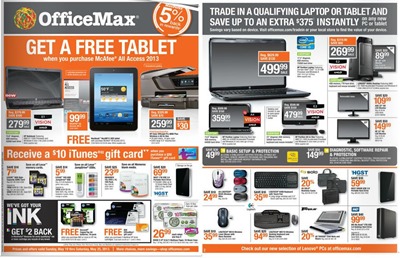 Office Max continues with their grey screens. They have no problem showing icons on tablets—that’s still a sales incentive, apparently.
Other ads I’ve inspected continue to show the Windows 8 icons.

That means they are mostly using Windows 7 apps via the Windows 7 "desktop" mode, according to new research from Soluto, a startup that helps people remotely manage Windows devices.

Probably those users would be just as happy if Windows 8 never came out, since they are using the “Windows 7 desktop mode” anyway.

Windows 7 has proven to be just as much a virus magnet as any other version of Windows. I don’t know if Windows 8 is any improvement. Windows 7 is better than Vista, but both suffer from complexity that is so hopeless as to be unmanageable over the long term. Somehow other operating systems, Linux for example, survive very nicely without the weekly basket of patches that must (ideally) be scrutinized before installing lest they foul rather than fix an already functioning system.

So I don’t know what the screen censorship might mean, but perhaps it could be a harbinger of a phase in which users, particularly businesses concerned with maintaining productivity, begin to pressure Microsoft to work seriously on a more robust and secure system than they have delivered to-date.

You will soon find out all the problems with linux once you started to use it. As an average user (not a professional programmer), you are better off with windows (even windows 8).


I've been a happy Linux user for years. There are various flavors. Linux Mint, for example, is an easy transition for Windows users.