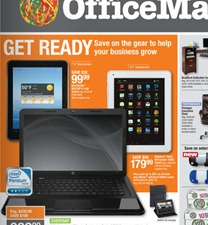 I suppose one can’t read too much into a single ad, but I noticed that the OfficeMax ad bundled into today’s Star-Advertiser had deleted screen images of Windows 8 – from each of the computers inside as well as on the front page of the ad.

Can a bleak, dark screen actually sell more computers than one with a Windows 8 home screen?

Could this be a new strategy? Speaking for myself, I find the two tablets pictured behind the laptop to be more appealing than the laptop would have been even with the large and comparatively primitive-looking Windows 8 icons. Having become used to the simulated computer screens in ads, I find the blank screen rather off-putting.

Sales of desktop PCs have suffered due to the popularity of tablets and smartphones, but many jobs still require the horsepower and compatibility of the Microsoft/Intel architecture. But Windows 8 may not be what users want. In fact, there are several discussions which Google will find for you explaining that it is possible to downgrade a new machine from Windows 8 to Windows 7. Here’s one. And for those who want the start button back, there are programs that restore it to Windows 8.

The blank images could be for a different reason, but let’s see if retailers begin to downplay Windows 8. The new operating system may actually be hurting sales.

Global PC sales tumbled 14% in the first quarter of 2013, the biggest slide since US research firm IDC began tracking the industry in 1994. The poor consumer response to Microsoft's Windows 8 operating system, contributed to the plunge.

The firm said Microsoft's latest version of Windows had failed to revitalise the industry. This is bad news for the software giant.
…
Microsoft's operating system is used on most of the of the world's PCs and it launched Windows 8 last autumn which was a completely overhauled version with touch-screen capabilities.

However, IDC said Windows 8 hasn't only failed to boost PC demand but has actually contributed to the slowdown - - confusing consumers with features that don't improve in a tablet mode and compromise the traditional PC experience.

That is such an interesting observation! I would have just accepted that the comps were off and never read more into it...but I think you're right.