“Hee, the chairman of the Senate Judiciary and Labor Committee, pushed through amendments to House Bill 622, the vehicle that would make the shield law permanent. …. As sometimes happens in legislative committees, Hee described the changes but did not provide advance copies of the amended bill. Members voted for the amendments without reading them.”--Don't change journalists' shield law (Star-Advertiser editorial, 4/5/2013)

Why have legislative committees at all when all power rests with the Chair?

Hawaii Reporter editor Malia Zimmerman penned a chronicle of the Senate hearing at which a single powerful Senator demonstrated, at the possible expense of an effective and nationally-respected state law, how far Hawaii’s state legislature has deviated from the ideal of representative government. 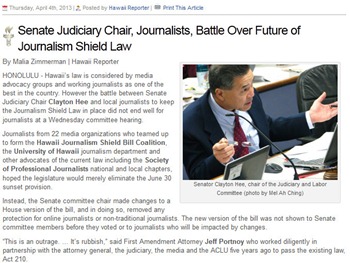 I recommend that readers click over to the full article, it’s a well-crafted report. But here’s a snip from near the beginning:

Journalists from 22 media organizations who teamed up to form the Hawaii Journalism Shield Bill Coalition, the University of Hawaii journalism department and other advocates of the current law including the Society of Professional Journalists national and local chapters, hoped the legislature would merely eliminate the June 30 sunset provision.

“This is an outrage. … It’s rubbish,” said First Amendment Attorney Jeff Portnoy who worked diligently in partnership with the attorney general, the judiciary, the media and the ACLU five years ago to pass the existing law, Act 210.

Here is Zimmerman’s description of Sen.Hee exerting his power as chair:

Hee, who wore his signature dark tinted sunglasses throughout the hearing and went from irritated to irate when challenged by fellow senators on his proposal, slammed the media saying journalists make mistakes and are not always truthful or accurate.

Despite the “challenge” by fellow senators, they obediently fell into line and passed an amendment they haven’t even seen. In other words, they have voted on whatever Hee wants to write after the fact.

Can this be described as democracy? Were the people represented, or just Sen. Hee?

Contrary to the pull quote above, in our state legislature, committee chairs, whom I liken to feudal lords under the Japanese Shogunate system, routinely direct their committee members to vote on amendments that don’t exist.

And committee members bow to their lords and pass the non-existent amendments often voting for it unanimously.

Somehow, this routine procedure escapes description in talks describing how bills pass through our legislative system. While other state legislatures may be little different, or may provide even greater opportunities to bypass democratic process, that’s no excuse for why this should be tolerated in Hawaii.

If you have a copy of the Star-Advertiser, Richard Borreca’s column on today’s editorial page is also worth a read:  Sometimes the Legislature has to be saved from itself. Borreca’s article describes how lawmakers have had to be muscled into doing the right thing.

In other words, sitting in the committee room, losing a day’s work, waiting for your turn to be granted two minutes time to testify (a routine practice of several of the feudal lords these days) is not the most effective way to ensure that the intent of our state constitution is met.

Power rests with the people only as long as the people exercise their power.

Another demonstration of the Shogunate at work could be the House leadership’s handling of bills to decriminalize marijuana in Hawaii.

Decriminalization (which is not legalization) has majority support across the public at present, which was reflected when the Senate voted unanimously to decriminalize small amounts of marijuana in early March.

Yet House judiciary chair Karl Rhoads single-handedly was able to kill a companion bill, asserting that it did not have enough votes to pass the House. The bill should have been voted upon by his committee, but that vote was denied.

Simply put: Rhoads’ action denied the public the opportunity to have their representatives vote on the bill. This also is routine.

The Senate bill crossed over and was killed in the House despite, according to Star-Advertiser reports, the support it enjoyed from key lawmakers.

Into the Tunnel of Love 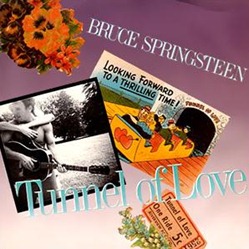 It’s like going into the Coney Island “Tunnel of Love”—nobody knows what happens in there. It’s dark, the pesky public isn’t present, and there’s no need for transparency or accountability. Nobody sees, nobody knows, what conferees discuss in the darkness.

For one thing, whether or not committee members are appointed, or who they are, For example, conferees may be appointed who either supported the bill in question, or who opposed it. The appointment is completely dependent on leadership in both Houses.

So, for example, the president of the Senate will determine who sits on the conference committee on the Senate side, and that will clearly determine the fate of the bill. Or, if conferees are not appointed, a single legislator (Speaker of the House or Senate President) will have determined the fate of what may have been an important bill, because that will kill it. Often, the press simply reports that a conference committee was not appointed, hiding in the passive voice a dirty bit of politics.

There’s nothing democratic about these conference committees. Regardless of how much public testimony has been given, that is, how many days of work have been collectively lost as concerned citizens wait their turn to chime in during committee hearings, the door is now slammed on the public.

Advocates for GMO labeling, for marijuana decriminalization, for continuation of the valuable shield law, and no doubt other groupings, have reason to question whether so much power should be vested in a system that is arguably an imitation of democracy rather than its best exemplar. Check this out:

All political power of this State is inherent in the people and the responsibility for the exercise thereof rests with the people.  All government is founded on this authority.

It is up to us whether we defend our authority or cede it to powerful politicians.

I just left this comment on today's Civil Beat entry on Hee and the shield law:
I've been a journalist for almost 40 years on Kauai with a web site/blog doing news and analysis/commentary for 5 years, five more before that doing straight news and 10 before that on TV news. I have reported on a thousand stories on Kaua`i, and now I'm certainly on the outs with this amended bill.
But what interests me is the first amendment issues. While a shield law is not a first amendment right (at least according to the courts) if you are going to have a shield law and then exclude certain reporters and "publications" not THAT seems like a first amendment violation to me.
Not only that but before the shield law I had to decide no less than a couple of times a year "will I go to jail for this story" when I'm approached and asked to guarantee anonymity to a source. It's been a pleasure not to have to think that for the last few years. I guess now I- and my family- will have to go back to worrying about that every time I get a call, email or letter saying "I can give you the inside story on corruption but you have to protect me."
Stay out of my notebook Clayton.