Media might look beyond Sen. Hee’s actions to see that Hee did nothing unusual


“ ‘If they pass this law we’re going to go from the best to the worst in the country,’ University of Hawaii journalism professor Gerald Kato said, noting that Hawaii’s law has been considered as a model for a federal shield law.” 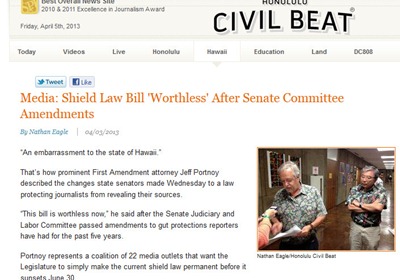 Kudos to CB for remaining amazingly civil about this outrage.

Aside from the immediate issue at hand—the gutting of an important law, one which was seen as a national model—I hope that this incident, regardless of how it plays out, might inspire some professional journalists to look into the processes and ethics that prevail at Hawaii’s state legislature.

What was done to the shield law bill happens to other bills each session. Perhaps the committee chairs act with less drama than Sen. Hee apparently exhibited, but they do exactly as he did to other legislation.

There has been a curtain of silence in the commercial media that is surprising. While Senator Hee has been named as the agent responsible for gutting this particular bill, other committee chairs are seldom singled out for doing pretty much the same thing.

Perhaps media highlighted Hee’s action for the crisis he has created single-handedly. But check it out—his committee voted in lockstep with the orders of their chair, voting for an amendment they hadn’t even seen. Only two Senators voted with reservations. That alone should ring alarm bells—our democratic process is defective. Sen. Hee did what he did because he could. It was SOP—standard operating procedure—at the Hawaii State Legislature. A chair gives orders (“recommendations”) and the committee complies exactly.

Because this bill directly affects journalists’ ability to function as the public expects, they are (very correctly) writing about it in detail.

But please don’t stop there. The public deserves to know how one man can do this, and that what he did is not at all unusual.

That would be a first step in correcting the problem.