Feds may force Hawaii to use modern, cost-saving lighting technology

The State faces criminal penalties, according to news reports, because it has not used the technology for street and stadium lighting that would reduce migratory bird kills. Using reflectors that direct light down to sports stadiums, for example, instead of shining upwards toward the sky, would also have saved taxpayers the cost that this waste incurs.

And just to show they can do what they like, the state appears to be investing in legal services to fight the feds. 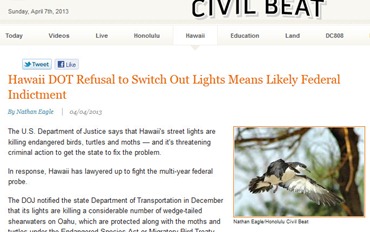 The U.S. Department of Justice says that Hawaii's street lights are killing endangered birds, turtles and moths — and it's threatening criminal action to get the state to fix the problem.

In response, Hawaii has lawyered up to fight the multi-year federal probe.
…
To defend the state in the threatened criminal case, the attorney general’s office in January got the OK to spend up to $150,000 on outside legal counsel.

Disappeared News has posted several articles on proper use of public lighting. For example, this clip of a commercial advertisement for stadium lights is from the article:

The ad photo was probably shot on a misty night or with the use of smoke to make the light rays visible. What it demonstrates is that lighting the playing surface only (with little to no upward leakage) isn’t rocket science. Using shaped reflectors, every bit of electricity goes to lighting up the field. Fewer light poles are required and there is cost saving just from that as well.

Nor is this technology new. Around 1966 I won a first prize student award from the Illuminating Engineering Society for my design of an indoor swimming pool illuminated by lights in properly designed reflectors. I just tapped what was well-established engineering practice even at that time.

Fast-forward to 2013 and it takes the DOJ to force Hawaii to use 20th century technology.

Considering that we pay about three times the national average for electricity, you’d think that wasting it lighting up the moon and stars would be a concern. But no, the money is just lifted out of our pockets. That’s right, you’ve been paying to light up Alpha Centauri and the Crab Nebula. And to kill migrating sea birds.

[I’m not sure what criminal charges would entail. Would federal marshals frog march Governor Abercrombie off to prison? Probably not that. It will be interesting to watch how this plays out. In the end there will likely be a settlement.]

The same Disappeared News article introduces the concept of ordinances against light trespass, which we don’t have  here in Hawaii. Ordinances regulating the use of public and private high-intensity lighting would be an advanced subject for Hawaii, but is another aspect of appropriate use of technology. Not only does unwanted intrusion of lighting into a neighbor’s yard or windows represent a kind of trespass, it is also wasteful of public money. Again, the light should all be directed into the area where it is wanted.

Finally, I wonder why we tolerate obvious waste of tax money, whether it is watering the street instead of the plants in the rain, or lighting up the sky instead of sports fields and streets. That last link is from a short 2009 article. It doesn’t seem to matter how much I write. Good thing the feds are now on it. It seems we need the federal government to straighten us out from time to time.

These are all management issues, by the way. All curable.