HONOLULU April 1, 2013—Declaring that the closing of Macys in downtown Honolulu has created a public health emergency, Governor Neil Abercrombie announced this morning that he is diverting funds from the state 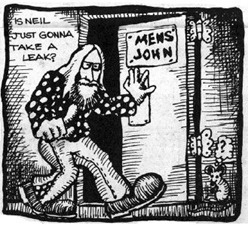 10% withholding of the 0.5% Honolulu transit surcharge to fund a new initiative to install a network of public toilets throughout the Honolulu metropolitan area.

“With the closing of the Macys branch on King Street, there was no public toilet accessible between Aala Park and the Alapai Transit Center, unless you count the State Capitol. From a public health perspective, that’s unacceptable in a modern city like Honolulu,” he stated.

As to the diversion of the state’s hotly contested “cut” of the transit tax, Abercrombie said that it is justified “Because the City seems oblivious to the need to provide this basic service,” a failure that affects not only residents, but the tourists on whom the state’s economy depends.

“There should be no need for tourists to be peeking into tents on Beretania Street asking where is the nearest public toilet,” he affirmed. “Instead, we should have maps clearly showing that Hawaii cares.” 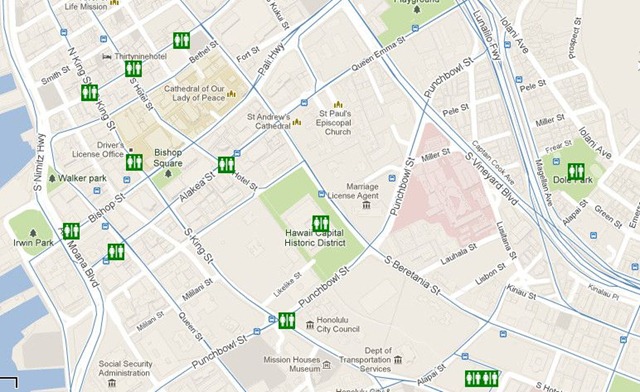 The Administration’s proposal includes public facilities at each planned Rail stop, which will be installed, said the Governor, if the City fails to provide adequate restrooms within each transit station.

This sounds like a lot of crap! Heh, sorry couldn't let that one go. I don't remember other cities with public restrooms. You need to go badly? do what everyone else does. Find a McDonald's.


Many thanks, Larry, people need to recognize that public restrooms in a place depended on tourism is essential. I wonder if such a map is available to tourists? Usually I see signs on restaurants declaring "NO PUBLIC RESTURANTS".


There are apps for that. See Take a load off with crowdsourced bathroom locator apps for some examples.

I've only tried two of them. "Find Toilets" shows how sparse the situation is here in Honolulu, but not just in Honolulu. Toilet Finder may work better, I need to compare the two over time. The latter seems to zoom in to my location better. Either lists about 10 locations around town, including the State Capitol and the condo where I live...


That should have been "Toilet/Bathroom Finder."