On the ten-year anniversary of the start of the Iraq war, Star-Advertiser is AWOL 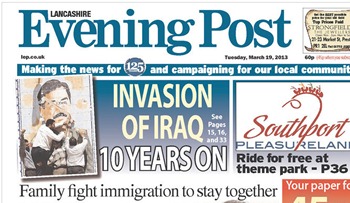 For some papers, the tenth anniversary of the invasion of Iraq was front-page news, for others there was something inside. Then there are papers that ignored the anniversary altogether. Some will no doubt run a story tomorrow.

Since many troops based in Hawaii were called to the Iraq and Afghanistan war, you’d think there would be something in our daily paper. But no.

For the record, here is a list of Hawaii-based units that were deployed in the Persian Gulf region on the day when we invaded Iraq, snipped from a Star-Bulletin story:

250 Marines from the 1st Radio Battalion from Kaneohe Bay

Buoy Tender Walnut with crew of 50

An editorial on page A10 at least mentions the anniversary, but starts off more concerned with opinion polls than with facts. The answers to "Was it worth it?" or "Is the United States more secure?" do not come from poll results.

The editorial grossly underestimates the death toll by reporting only the number of Iraqi deaths reported in the US media (110,000-121,227 civilian deaths, via Iraq Body Count) rather than more credible estimates that range up to 1.2 million. The editors picked the smallest number they could, rather than the most credible.

The main thrust of the Star-Advertiser editorial is a call for better treatment of returning vets, and that’s not only commendable but important to see in print. On the other hand, the vets would not need treatment had they not been deployed in the first place.

The paper did not mention that the public was lied to about WMD, nor does it admit the role that the commercial press played in beating the drums for war. It doesn’t discuss the cost of the war, which could ultimately reach $4 trillion. Yes, four trillion dollars, even as Republicans try to slash benefits for 99% of Americans, including vets. How is that number arrived at? For a full explanation, watch today’s Democracy Now or check out the printed transcript on their website:

On the 10th anniversary of the U.S. invasion of Iraq, we look at a massive new report by a team of 30 economists, anthropologists, political scientists, legal experts and physicians about the Iraq War’s impact. "The Costs of War" report found the total number of people who have died from the Iraq War, including soldiers, militants, police, contractors, journalists, humanitarian workers and Iraqi civilians, has reached at least 189,000 people, including at least 123,000 civilians. Financially, the report estimates a cost to U.S. taxpayers of $2.2 trillion, a figure that could one day approach $4 trillion with the interest accrued on the borrowed money used to fund the war. 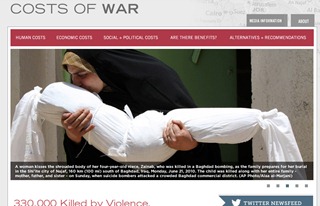 “The Costs of War” report in full is here. For a useful summary, see this Common Dreams article. 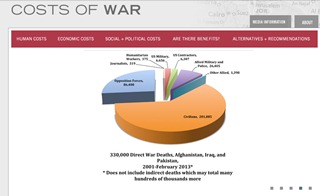 Thanks. I remember back in 04-07 watching the 3 Hawaii TV stations I could receive in my office, and what seemed like a solid stream of indistinguishable news programs and perpetually repeating commercials, thinking to myself: "WTF? Some old ladies selling cookies? A lost cat? Traffic? Aren't in the middle of a #^@&ing war? Where's the coverage? What about the money? The insider knowledge? WTC7? You call this news?!"

Thanks for pointing out the fact that these good ol' boy "party members" could be actually doing what they pretend to do.

Please note that at least one other person out there gives a sh!t.