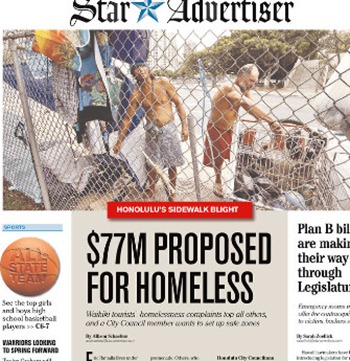 The Sunday Star-Advertiser headline is a bit misleading. No one is proposing $77 million “for” the homeless.

Waikiki tourists' homelessness complaints top all others, and a City Council member wants to set up safe zones

What is bugging the City Council is that they are getting complaints. There’s been no sudden outpouring of compassion. Who is to blame for the complaints anyway? The city itself.

Indeed, I suggest that both the city and state governments are notably lacking in the so-called “aloha spirit” when any disadvantaged community is involved—including the homeless, Micronesians needing medical care, special needs students, adults living with mental illness, prisoners, and so forth, have sadly had to depend on the federal court system to wring their fair share of “aloha” out of our government.

So sadly, the city council will be focusing its efforts at eliminating the complaints, and reduced complaints will be the measure of success for them.

Honolulu was ranked the 8th meanest city in a 2009 report—see, for example, Honolulu ranked among meanest to the homeless (Honolulu Advertiser, 7/16/2009). For all we know, it could be higher on the list if the survey were done today, given the city’s numerous and unsuccessful raids to confiscate personal property of those living on the streets.

Now, certainly, more money, correctly applied, would be very welcome. But tent cities, as the article eventually notes, are not a solution. Crime moves in, and other municipalities that have tried it have had to give up on them.

The city’s actions have contributed to the complaints and have disadvantaged residents as well as visitors. Why do we see tents on sidewalks? Because the tents have been pushed out of the parks. It saddens me to see elderly people standing at bus stops because the benches have been taken away and they can’t use the horrible mushroom seats, or the two mushrooms provided are already occupied. Inadequate “solutions” lead to new problems. Both the city’s actions and inaction have lead directly to the increase in complaints.

Why do we have people living without homes? For many reasons, but one of them is that there are few affordable rental opportunities, and the “housing first” effort is just not here yet. When the term “affordable housing” appears in a news article, one has to check to see whether what is really meant is a condo affordable to the middle class. The “affordable housing” touted by developers won’t benefit a family unable to find work that pays well enough for both food and Honolulu’s typically exorbitant monthly rental fees.

On any given night, IHS has about 20 vacant beds at its shelter for women and families and about 50 vacancies at its men's shelter. Mitchell attributes the vacancies to the lack of inclement weather on Oahu, shelter locations, rules such as a ban on pets, drugs and alcohol, and a zero-tolerance policy on violence.

The “lack of inclement weather” means there will always be people living under the sky, and it’s not unconstitutional or illegal not to have a roof over one’s head. But as to the bans—if people would go to a shelter if they could bring their pets, how about working on that, for example? In other words, rules have their purpose given the lack of resources available, but on the other hand, without proper resources, the city’s “problem” is not going to be solved.

The zero-tolerance policy on violence has an interesting consequence. I’ve spoken with homeless individuals who felt that they had been unfairly banned from shelters for a period of time and then beaten up on the streets. They assert that they were banned for a span of days because of not following a rule in some way. In other words, “zero tolerance” inside a shelter perversely contributes to making the surrounding area more violent. Again, it may seem counter-intuitive, but that’s the result of “zero-tolerance” policies whether for violence or for other reasons. No, I don’t have an alternative, given that there are no resources for an alternative.

I didn’t read anything in the article about job training, which would include preparation for interviews and the availability of clean clothing, for example. Even deeper, the state would need to work on the availability of jobs that pay a living wage. Job training doesn’t help without jobs to apply for. And it works better combined with housing-first and mentoring.

So given the misplaced motivation, it is unlikely, in my view, that the city will put in place programs that benefit those currently living on the streets but who would prefer alternatives. I very much want to be proven wrong about this. As to those who just want to stay on the streets, that will take deep thought.

Finally, one thing that’s missing is to involve the homeless themselves. Instead of working “with” the most important stakeholders, the city council is trying to find something to do “to” them. How many homeless people are on committees working on the “problem?” How many are employed by the city to work with it on outreach and other ways to provide convincing benefits? Should not the most important stakeholders be widely involved in finding solutions that work for them?


Preventing homelessness in the first place

Here’s a tale that would fit Honolulu a bit better if we were, in actuality, doing our best to help people who are homeless. But I like it anyway:

A villager is walking by the river early one morning. The villager looks out into the water and sees a baby floating down the river. Horrified, the villager races into the water, grabs the baby, and brings the baby to shore. The baby is fine.

Once more, the villager looks into the water... and sees dozens of babies floating down the river.
The villager calls out an alarm, and the entire village comes running to the river to rescue as many babies as they can before the water carries them away.

This is a village that is mobilized. Every villager is at the river, trying to save the babies from the water.

This is a village that is improving lives. Many of the babies are being saved.

But the babies keep on coming ... because no one is going upstream to put a stop to the ogre that is throwing the babies into the water in the first place.

The shame for Honolulu is that we are not working on that ogre, but sadly, we’re also doing little to pull the babies out of the water.

The real shame not mentioned here (excuse me if I missed it) is the Hawaiians being houseless and homeless on their own lands.

Thatʻs the biggest shame I see. Start there and the problem will dissolve.


Yes, that is the biggest shame. Sorry I did not say so.