Unclear on the question? City responds on advertising on police tape

On February 1, 2013, I sent a question to Mayor Kirk Caldwell with the subject: “Query on advertising on city property.” Here it is, below. Today I received a response, also posted below.

Here’s the query I sent:

Advertising was spotted on police tape on Wednesday, 1/30/2013--see photo below, taken on Beretania Street.

I wonder if the Mayor or someone else would like to comment on this--is it appropriate to have advertising on City property? Is the budget really that bad that ads are being taken on police tape? Also, if someone wishes to advertise on police tape, where do they apply? Does the City endorse Suzuki's offer of "$1,000 cash back and 0% APR?" The tape seems not to say "paid advertisement." 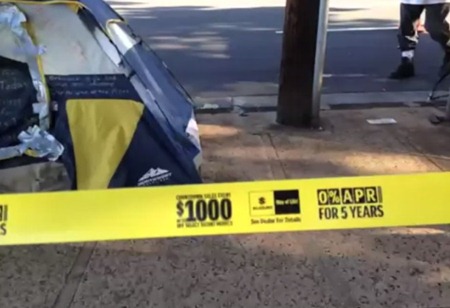 And here’s the reply, emailed to me this morning:

Well, thatʻs pretty much the definition of a dodge. Which itself is an answer of sorts. Still would love to know the real story behind that Ad tape. I bet they used it at all their raids that day. Now thatʻs effective advertising.!


Right, that really wasnʻt an answer. If the ad streamers are to be where police presence is necessary, then they ought to use a different color tape. Yellow is standard issue and belongs to police.

When it is official police business/crime scene, etc. that corporate nonsense ought to hitchhike somewhere else.

In addition, it just seems kind of a moral/ethical issue especially if it is used for crime scenes: such as, this area is currently blocked off, sorry for the inconvenience, we are removing a human variety of public property that the corporation-owned-city found dead. We will be disposing of the unsightliness, please stand back, odors are offensive, thank you have a nice a day and donʻt forget to do your banking with .......