Sworn testimony by a City worker has suggested that the City may be conducting a fairly large program of confiscating personal property from homeless individuals and families living on sidewalks. This property must be kept safely for up to 30 days and returned when claimed. The City has also destroyed personal property by crushing it to bits in garbage trucks.

When the City raided the Occupy Honolulu encampment for the 56th time (by Occupy count) they brought a garbage truck but didn’t use it, as had been their custom. 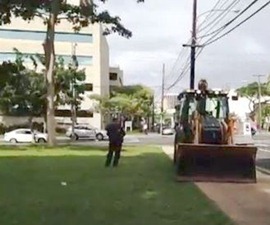 They brought a bulldozer too, but just parked it on the sidewalk nearby.

The sudden good behavior was because a lawsuit had been filed against the City and County of Honolulu by several Occupiers, and the matter was before a federal judge. The judge has been asked to order a preliminary injunction against illegal seizure of personal property, and the City is currently bound by a protective agreement made with plaintiffs and ordered by the court.

But elsewhere, and prior to the lawsuit, the situation was different. Seized property had been crushed and disposed of in the garbage trucks, and I have no idea what they would use a bulldozer for except to intimidate (see snips below).

The City regularly raided and destroyed or seized property at homeless encampments as well, which of course does nothing whatsoever to assist those people to be placed in housing or to help them find jobs. If the raids followed the Occupy pattern, the garbage trucks were put to use illegally and in violation of the city’s own ordinance.

The city ordinance is defective in the first place. When legally applied, it requires that city workers tag property one day before a raid and when collected, to place items into numbered bins. The property is then stored without charge at a city yard, and may be claimed within 30 days. So the city is effectively running a public storage facility at taxpayer expense.

During the evidentiary hearing held in federal court on January 17, 2012 before Judge J. Michael Seabright, Mr. Allan Sato testified regarding the procedures involved in the repossession of impounded personal property at the Halawa storage yard. Mr. Sato is the Construction Inspector for the Department of Facilities Maintenance for the City and County of Honolulu and is the person who answers the phone and attends to making an appointment for a person to come in and reclaim their property.

Under questioning, Mr. Sato reported that on the day of the Occupy raid, the City conducted a total of about twelve sweeps, confiscating four to eight bins of property at each.

While the main focus of his testimony was to establish facts around his absence when one of the Occupiers called to arrange return of his property and the failure of anyone to call back even after Sato returned to work days later, he did provide a ballpark figure for the extent of the storage operation that the City is operating. Remember, they take the property, but all of it can later be reclaimed, perhaps to be taken again at another time.

Taking all of this property into temporary City custody is not an effective way to assist homeless individuals or families, no matter how many times the City may raid a camp. So far, the 56 or so raids have not discouraged the Occupy movement either. Yes, 56.

Judge Seabright declined to order sanctions at the conclusion of the hearing. Instead he required the attorneys to get together and revise the agreement that the City failed to follow in order to make it more workable. The new language is to be provided to the Court by January 28. Other matters, Seabright said, will be taken up at the time of the hearing on a preliminary injunction. If the parties cannot agree, then the matter will be assigned to a magistrate judge to facilitate.

A hearing on Plaintiffs' Motion for Preliminary Injunction is scheduled to be heard on March 12, 2013 at 9:00 a.m.

Those old sci-fi movie shots sure look a lot like current reality: