Narrow road lanes? How much are human lives worth?

A front-page article in this morning’s Star-Advertiser reveals that the state has applied to the Federal Highway Administration to narrow lanes on the H-1 near the Lunalilo on ramp. The shoulder would also be narrowed to three feet. The article reports the state view that alternatives are too expensive.

Ever tried to squish a disabled car onto a shoulder only three feet wide? Can’t be done. How well will traffic be able to move aside for emergency vehicles? Will anyone tote up the deaths that result because ambulances are slowed down?

Since Disappeared News has posted articles about dangerous road conditions over the years, I thought I would continue the tradition and highlight to the FHA just how badly the state maintains its roads. Allowing the narrowing of lanes when the state can’t keep paint on the roads sounds like an invitation for collisions and deaths to me. So I sent a few photos and comments to them in an email this morning.

While traffic may crawl at what the newspaper article calls a “bottleneck” during rush hours, at other times of the day it zooms by at or above the speed limit since there is virtually no enforcement of speed on our highways. So the speed differential between a car entering the roadway from the on ramp and cars speeding by could easily be in excess of 50 miles per hour, and drivers may have a natural tendency to veer slightly to the left to clear incoming vehicles. Guess what—no clearance in the narrowed lanes. Plus, if a car is disabled, three feet shoulders mean it can’t be pushed off the road. KaBAM!

Going back to what the FHA should consider with regard to road maintenance, I moved over to the passenger seat this morning and took some photos of the roadway going East near the 6th Avenue exit. This is a stretch of road that was repaired several months ago. Notice that it is hard to discern the interlane markings. The reflectors don’t reflect, and the paint, if present at all, is inadequate. These are unretouched photos. 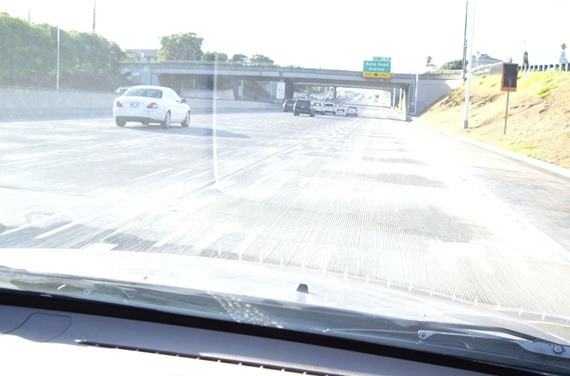 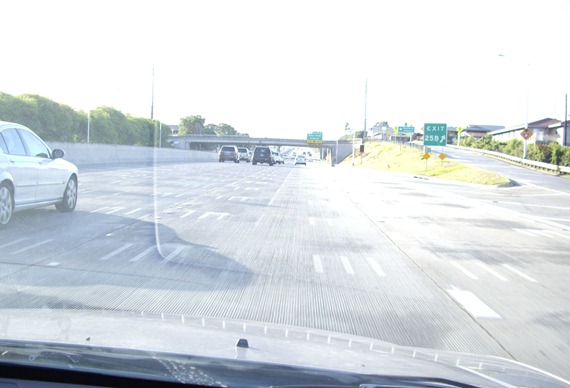 In the second photo there is a streak that looks just like paint between lanes.

In the early morning with the sun ahead, and particularly in the rain, drivers must slow down below the legal minimum speed because of uncertainly whether they are in lane or not.

I’ve posted photos over the years of totally faded turn arrows, crosswalks and lane markings on both state and city roads. In this case, it is the state requesting permission to narrow the lanes, and the state just doesn’t care enough about safety IMHO. And it’s not just my opinion. A Reason Foundation report for 2008 that ranked Hawaii 50th among the states in "Urban Interstate Condition"  (19th Annual Highway Report - Hawaii).

The narrowing of lanes as proposed sounds dangerous enough to me, but to allow the Hawaii state DOT to do it would be an invitation for trouble. I hope the FHA turns them down.

it's a new lane that didn't exist before, so if a car is stalled, it will be the same amount of lanes that were there before.


There's a new lane, but the others are narrower as well.


There is no shoulder now, so cars can't be moved out of the way. It's also more hazardous for emergency vehicles.