The Star-Advertiser’s vog photo in Monday’s paper also turned out to be the best photo I’ve seen of the dangerous road conditions caused by Hawaii’s Department of Transportation construction on the H-1 highway. After the road bumps were ground down, they left markings on the road that can confuse drivers in bad weather or with the sun straight ahead (see: Star-Advertiser vog picture shows dangerous condition of H-1 highway, 12/3/2012). 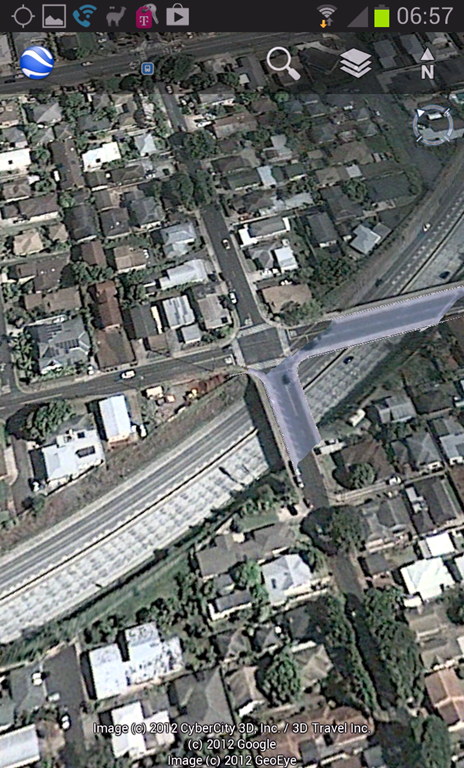 This morning I was playing with my shiny new smartphone. I installed Google Earth and took it for a spin over Honolulu.

The Android app is really impressive. Fly anywhere on the planet in the palm of your hand.

So I headed East on the H-1, just to experience the trip out to Hawaii Kai.

But wait—look at this view of the highway in this screen capture from the phone. The satellite image appears to have been taken when the eastbound lane was completed but work on the westbound lane had not yet begun.

Certainly, the irregular section of road needed repair. It was a bit like riding a roller coaster before they did the work.

But that situation likely wasn’t hazardous. The way they have left the road surface is.