If I’ve missed something, could someone please point me in the right direction?

Ok, the press on Oahu have had more than enough time to develop their film and get the story out on the anti-PLDC protests held statewide on Monday, October 8, 2012.

Of course, since development interests are big business in Hawaii, I wouldn’t expect great coverage of protests against something that is such a gift to potential advertisers as is the Public Land Development Corporation. 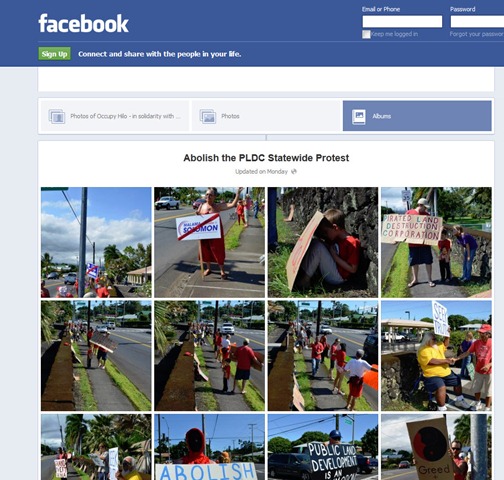 Thanks to Occupy Hilo Media ‏@OccHiloMedia for a pointer to their Facebook page where there are many photos (more than this snip) of the Hilo demonstration.

About 50 people were reported to have attended over there.

Also on the Big Island, the Hawaii Tribune Herald did report on the protests. A tiny snip:

The Public Land Development Corporation is a terrible mistake that should be abolished, protesters across Hawaii said in sign-waving demonstrations Monday.

This broader story on PLDC issues included mention of the protests:

…
And recent public protests across the state drew hundreds of participants.

Much of the criticism has centered on a section of state law exempting the PLDC from “land use, zoning, and construction standards for subdivisions, development, and improvement of land.”

The mission of the PLDC has been called everything from a land-grab, to anti-democratic, to Nazi-ism.
…

[BigIslandNow.com, ANALYSIS: Public Protest Too Much For Development Agency?, 10/12/2012]

Protests on Kauai were covered by the Garden Island:

For a few hours Monday afternoon, the entire state connected through simultaneous events linked by one moving force: Repeal Act 55. Community members on Kaua‘i, O‘ahu and Big Island got together from 2 to 4 p.m., and on Maui from 11 a.m. to 3 p.m., to protest against the controversial act

Protests were directed at both the Legislature and at Governor Abercrombie. But since both of those are right here at the State Capitol, we need to know what the public is doing on Oahu and statewide also.

If the “entire state connected through simultaneous events,” you’d think there would be lots of coverage here. You’d be wrong.

Again, if I’ve missed something, please let me know.

Duane Karisu, PLDC board member and former boss of the PLDC executive director, owns all of the mainstream media in Honolulu. Why would they cover protests of his newest way to make money?


Thanks for bringing some attention to the PLDC protests and the lack of Oahu coverage. Actually, Iʻve grown so used to mainstream media NOT showing up at important events that I worry when they DO show up. Often they are so misinformed about what theyʻre covering that the resulting reports (cobbled together from "official" press releases) are hazardous bits of misinformation. Sorry, thatʻs kind of a rant.

Anyway, hereʻs the youtube playlist from various protests and hearings. They are edited individual segments from the longer livestreams of the events. http://www.youtube.com/playlist?list=PLpuR67BLmK3ScQY4lbehvtvJsIrU9hHp5