I am a Facebook resister. Maybe one day I’ll join, but not today. There is good stuff there and one doesn’t have to sign up to see it.

Come along with me for an interesting ride, or just click one of the links and skip ahead.

While looking for PLDC protests this morning, I thought I would start at Occupy Honolulu’s Facebook page. If you’re not a member, an annoying popup asks you to join, just get rid of it. 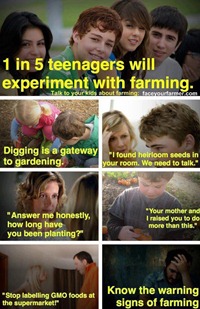 Partway down on the right side is a graphic “1 in 5 teenagers will experiment with farming” (click the image to go directly there).

Keep clicking on the photos—you are now viewing images posted on the wall of Grow Food Not Lawns.

There’s the White House garden, of course, but lots of other great images for sustainability advocates. 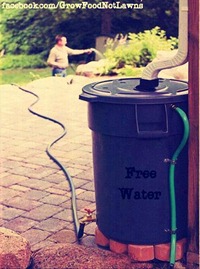 There are two showing easy ways to collect water from downspouts to be used later (for example) in watering the garden. I’ve questioned repeatedly why homes (and the so-called Manoa Innovation Center) do not make use of rainwater, instead paying soaring charges to the city for potable water to dump on lawns and into washing machines. It rains each day, more than enough for every home in the valley, yet what happens to the rain? It’s wasted.

These things never computed for me. If we on Oahu pay three times the national average for electricity (four times on Kauai), how come we are so late in using alternative energy? And is the best we can do an undersea cable that will benefit developers but run up our charges even more? That’s electricity. For water, we pay high rates and don’t use the free rainwater we have. The city wastes water by watering medians and overspraying onto roads even when it is raining. And don’t get me started on stormwater. We pay for sewer pipes while other states and municipalities require developments to dispose of their own stormwater on their property.

Of course, the ugly elephant in the room is the city’s willingness to cave in to developers and pave over some of the best farmland we have left on Oahu.

Why do we just talk about sustainability and do nothing about it?

Anyway, that was my little side trip on Facebook this morning. Click the first picture above and check it out.

Let me wrap up this rant with a video from Thursday’s Democracy Now, reproduced here under terms of their Creative Commons license. Click the thingy at the lower right for full screen. Click the title to go to the web page where there is a transcript.

New Mexico residents are trying to a break free from Los Alamos’ nuclear legacy by creating more environmentally sound ways of living. At the forefront of this struggle is renegade architect Michael Reynolds, creator of radically sustainable living options through a process called "Earthship Biotecture." Reynolds’ solar homes are created from natural and recycled materials, including aluminum cans, plastic bottles and used tires. These off-the-grid homes minimize their reliance on public utilities and fossil fuels by harnessing their energy from the sun and wind turbines. In Taos, New Mexico, Reynolds gives us a tour of one of the sustainable-living homes he created. [includes rush transcript]

Thanks for sharing that video. While I often watch Democracy Now, I had missed this episode. This man's work re-kindled in me the kind of curiosity and imagination I USED TO HAVE, back in the days of poring over the Whole Earth Catalogue. Fortunately, some people "followed their bliss" and stayed on that path. Now, oif only the rest of us can catch up with their vision.


Bart, I've wondered if people are allowed to be innovative here. For example, could a home be built in Puna similar to what's in the video, off-grid and not connected to sewer lines (because there aren't any...)?

Thanks for mentioning the Whole Earth Catalog. I, too, was a subscriber and spent hours with each issue. I ordered Owner Built Homes after seeing it in the Catalog and for a short while dreamed of using its methods one day to build a home out of sustainable ingredients. The book (if I'm remembering correctly) was one of the first to describe the idiocy of the way fireplaces are built in this country--light a fire and cold air is sucked in under doors and windows throughout the house because the fire blows air up the chimney like a pump.

And yet they are still built the same way today.

There's an ABOLISH the PLDC in HAWAII page/group on Facebook- an excellent clearinghouse of information and actions.
http://www.facebook.com/#!/groups/AbolishPLDCinHawaii/