Revisiting how UH governance might fit the “garbage can model”

I wrote about the “garbage can model” as applied to UH governance in an article on July 13, 2012. Just to reiterate why that model might apply to any American university and to the University of Hawaii in particular, here’s the origin of the term, snipped from that article:

Why “garbage cans”? It was suggested that organizations tend to produce many “solutions” which are discarded due to a lack of appropriate problems. However problems may eventually arise for which a search of the garbage might yield fitting solutions. A snip from a glossary of terms: 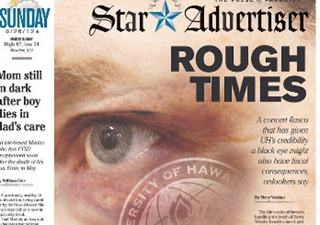 The Star-Advertiser continues to follow the juicy story as the concert scandal unfolds. In today’s front-page article we are reminded that it’s still not clear (in the current blame game) whether the UH president or Manoa chancellor was in charge of the mess. This fits the garbage can description of how “decision-makers for any particular choice change capriciously.” Maybe the chancellor was in charge at one time, maybe not. The cover-up in progress and what we, the public, are able to see of it, depends on “what garbage is currently produced and the speed with which garbage and garbage cans are removed.”

It would be instructive to dig through this garbage a bit more.

For one thing, there seem to be mixed expectations for how UH is run. It isn’t a business, although it’s top executives are very highly compensated. It is supposed to be an academic institution, a place of higher learning. It’s not General Electric or Hewlett-Packard. So the fact that UH athletic director Jim Donovan was re-assigned to a non-athletic position shouldn’t be confused with good management. It was whatever they fished out of the garbage can. In GE or HP the lines of responsibility would likely be very clear and failure would be evaluated and possibly dealt with in a “businesslike” way. Expecting UH management to do that is a mistake. UH is not a business.

Now, given that the organizational structure of UH is not the same as that of most businesses (shareholders wouldn’t tolerate garbage can thinking), the composition of the Board of Regents, who oversee the university and might be confused with a corporate board, is a huge mismatch. As a board, it does not control the organization as it would if UH were a private or public corporation. There’s no organization there subject to the control they are willing or able to exert.

In fact, Hawaii has placed both its primary and secondary educational systems in the hands of business people with no educational experience. Only one member of the Regents has an educational background: Chuck Gee had been Dean of the UH School of Travel Industry Management. The rest are attorneys mostly, there’s a retired diplomat, some real estate, and so forth. The public school Board of Education is composed similarly of non-educators—who supervise a school superintendent coming from the business world who herself has no pedagogical experience. And similarly, the BOE cannot control the Department of Education in any meaningful sense.

This is a failure of state government, and it will help assure that not much will change in education in Hawaii at any level.

So returning to the university, we have business people of various stripes overseeing an organization which wouldn’t make the cut in the corporate world as a business.

Which leads naturally to another question:

Is the University of Hawaii a school of higher education? Or is it a provider of sports entertainment beloved of state legislators and citizens alike, that needs to be attached to a college or university to be part of the NCAA?

We profess outrage each time we learn that yet another student-athlete has been taking money under the table. But the real scandal is the very structure of college sports, wherein student-athletes generate billions of dollars for universities and private companies while earning nothing for themselves.

It’s useful to invert relationships sometimes to see what truths might be revealed by the exercise. For example, is the Bishop Estate (now Kamehameha Schools) an educational institution responsible for educating students of Native Hawaiian ancestry, or is it a real estate megalith that happens to be stuck with the responsibility to run a school on the side? After Broken Trust they changed their name, but what truths might this inversion reveal?

Similarly, is the University of Hawaii an educational institution or is it a giant sports entertainment conglomerate that has to have a school attached to participate? Notice how state legislators piled on to ensure that their fun would continue to be of the highest quality:

Donovan and Stan Sheriff Center manager Rich Sheriff were placed on paid indefinite leave July 11 pending the investigation of the Wonder controversy. But while Sheriff was reinstated to his original position on Aug. 13, Donovan was reassigned on Aug. 12 to a position in the Manoa Chancellor's office. His titled has not yet been decided.

Donovan's supporters, citing a UH statement which said he was involved in no "wrongdoing," have sought his return as AD.

In a two-page statement, the legislators wrote, "We believe Mr. Donovan's performance as athletic director has been outstanding and we urge you to consider the advancements he has made and the relationships he has built in the community and at the legislature."

It’s too bad that these legislators are showing how much they value the sports entertainment function over the academic. Or are they actually concerned that UH students should receive the best opportunity to develop themselves physically as well as educationally? Not!

Would state legislators interfere in the management of GE, HP, First Hawaiian Bank, Sopogy, Outrigger Hotels or any other organization by attempting to influence the placement of an executive? Of course not. But UH is not a private or public corporation, you say. Well, then, what is it? Do lawmakers have a say to micromanage who works where at UH?

Any reformation of governance at UH needs to be complete and comprehensive. That’s not what these legislators are calling for. They just want to preserve the whole sports scene, the game, the beer, the tailgating, all the fun—none of which has anything at all to do with UH as an educational institution. Where were they, for example, when UH decided to shut down its school of public health, a decision which had major public policy implications?

Today’s Star-Advertiser front-page story provides some badly needed insight into the contents of the garbage can. In addition to the recap of the Regents credentials which I have relied upon for my comments above, it attempts a view of UH finances which could be more complete. Certainly, the placement of Donovan in a position that never existed and which has not been posted for competition might be viewed as problematic, but not because the position hasn’t been posted. It’s clearly a garbage-can move and should be accepted as that. Again, UH is not a corporation and its actions should not be interpreted using corporate logic. They will do what they can get away with because it’s the best they could find in that can at the moment.

I don’t believe that a university needs to cling to a wasteful model of corporate governance, although there are arguments to be made that tenured academic staff benefit from the free-wheeling structure. If corporate-style hierarchal management were imposed, academic freedom might suffer.

But what model of governance would preserve academic freedom and still bring economic responsibility to college management? Are there any better examples out there, either in this country or elsewhere? Aside from the rather frivolous (from an academic standpoint) concerns of some of our state legislators, who is actually working to assure that the money spent by students and taxpayers is buying us educational value? I think that’s partly behind the repeated questioning of UH executive salaries. The media is asking if those salaries are justified, or perhaps, are we getting our money’s worth.

It’s a good time to put UH under a microscope. Higher education in this country is rapidly becoming unaffordable: 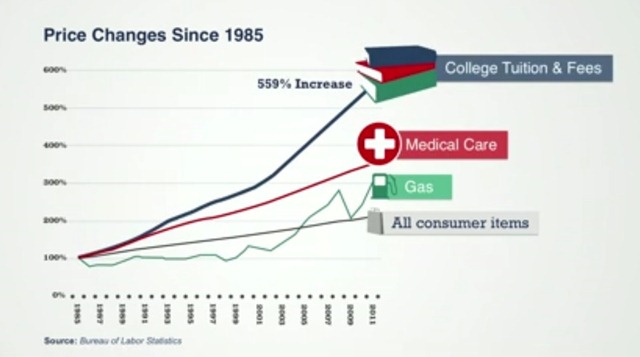 The USA is rapidly giving up on training the young people it will need to compete in the world economy. Recent college graduates can’t pay off their loans because of the poor state of the economy. Wall Street profits while the country slides into third-world status.

And here in Hawaii, legislators and probably much of the public are concerned with the viability of UH not as an academic institution but for its sports entertainment value.

We could, and should, move beyond the current blame game and put a process in place that will result in the replacement of the garbage cans at UH with an organizational structure that will provide the best education for our investment in the university. That would require sorting out our expectations of UH management and imposing a governance and funding structure that is appropriate to whatever it takes to fulfill public purposes in having a state university system.

I’m not holding my breath, though. Even the scandals seem to have entertainment value. (Sigh) Maybe entertaining ourselves is valued more than educating ourselves. Oh, well.