It’s been frustrating all these years—buying Safeway seltzer in the 2-liter bottles because there is no alternative in Hawaii. Safeway seems to have a monopoly on seltzer. And over the past year or so, the price has crept up and up. Why not, given monopoly power? What was under a dollar not so long ago is now $1.50. Cost of transportation doesn’t account for it, nor does the cost of ingredients—which is close to zero.

Even worse has been the guilt around buying it at all. Somewhere on the Mainland they fill large plastic bottles with plain water, add a little gas to it, and ship it across the Pacific to Hawaii. Then gulp, gulp, it’s gone, except for that &#$@ bottle, which we carry off to the recycling bin. Oh, how bad we have been.

No more. There’s a way to make seltzer at home, but due to problems shipping compressed gases, it had not been possible in Hawaii. 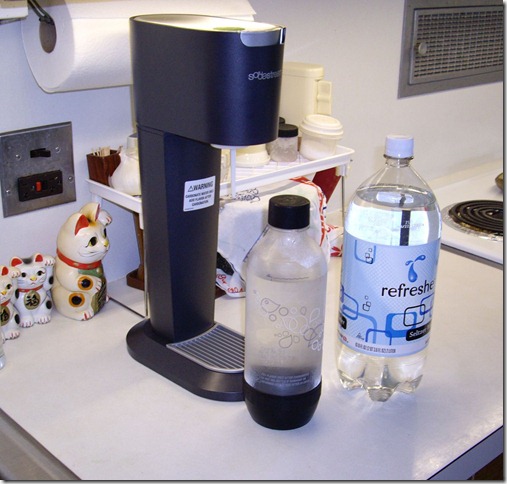 (Pic shows SodaStream Genesis unit with one of two included refillable bottles (no BPA), and a Safeway seltzer behind.)

This weekend, by chance, I learned that Bed Bath & Beyond carries several SodaStream models and will exchange depleted gas cartridges for filled ones. Each cartridge makes 60 liters of seltzer.

In a flash, we were off to the store, where helpful sales staff answered our questions about the SodaStream.

It costs a bit more than it would on the Mainland because they have had to arrange for special packing in containers to ship the gas cartridges both ways by sea. Still, we are way ahead in terms of costs. Two liters would come to about 67 cents, not a dollar fifty. This doesn’t include the amortized cost of the unit, but that should last quite a while. Since the unit itself costs $100, the break-even point is after three gas cartridges are used, which won’t take too long.

But more important: our carbon footprint is greatly improved. The guilt is gone (or will be when we finish the last of the Safeway seltzer still on hand).

The SodaStream unit comes with flavor packs to be added after fizzing. People say the stuff tastes good, but we don’t drink sodas, so we’ll give those away.


We used to have seltzer delivered in those glass bottles when we lived in Brooklyn. But that stopped even when I was a kid.

At one point we tried a kit which used little CO2 cartridges in the handle of a seltzer bottle, but it didn't taste very good for some reason.