“Manning was required to eat all of his meals alone and could only eat his meals with a spoon. He was not allowed to speak with any prisoners. He was given a suicide mattress with a built-in pillow. He was given a “tear-proof security blanket” that was “extremely coarse” and led to rashes and carpet burns on Manning’s skin. The blanket was stiff and would not “contour to his body” so it did not keep him warm. He was not allowed any personal items in the cell. He could only have “one book or one magazine” and when he was not reading the book or magazine would be taken away. It also was taken away each day before he went to sleep. He was not permitted to exercise in his cell. Any attempts to do push-ups or sit-ups would lead to officers ordering him to stop. Every night he went to sleep he had to strip down to his underwear and surrender his clothing to guards.”—from defense motion filed on behalf of Pfc. Bradley Manning

In his statement, [Ricardo Patino, the Ecuadorean foreign minister] said there was a risk Assange would be taken to the United States where he "would not have a fair trial, he could be judged by special or military courts, and it is not unlikely to believe he would be treated in a cruel and degrading way, that he would receive a life sentence or death penalty, with which his human rights would not be respected.|

Ecuador’s granting of political asylum to Wikileaks founder Julian Assange recognizes that the UK has very likely been cooperating with the US in order to expedite Assange’s ultimate arrest by the US. Once in US custody he could be subject to torture and inhumane treatment such as has been doled out to Pfc. Bradley Manning, the person alleged to have passed a trove of diplomatic documents to Wikileaks. Manning was held in conditions amounting to torture at a time he was not charged with any crime.

The granting of asylum to Assange by the President of Ecuador has put the spotlight on the nature of American justice in the 21st century. We have become a country where a fair trial cannot be guaranteed and which employs torture routinely in its prison system.

Sweden is also under scrutiny. If their intent was to question Assange on potential sexual assault charges, they have had plenty of opportunity to do so. Clearly, it is not “questioning” that Swedish authorities have in mind. If they do turn Assange over to the US as they are widely expected to do should he be successfully extradited by the UK to Sweden, they would become complicit in his expected torture.

As to Britain, the expectations were never very high to begin with.

"Is this really about the U.S. being the 'hidden hand' behind what the British are doing so that they can eventually get a hold of Julian Assange, try him for espionage and put him into a jail?" Ratner asks. "That’s what’s really going on here. Let’s not kid ourselves."--Michael Ratner, president emeritus of the Center for Constitutional Rights and a legal adviser to Julian Assange and WikiLeaks

The battle has been fought diplomatically—on Twitter, perhaps a new phenomenon. The British Foreign office tweeted their threat to raid the Ecuadorian embassy, and was piled on almost immediately. 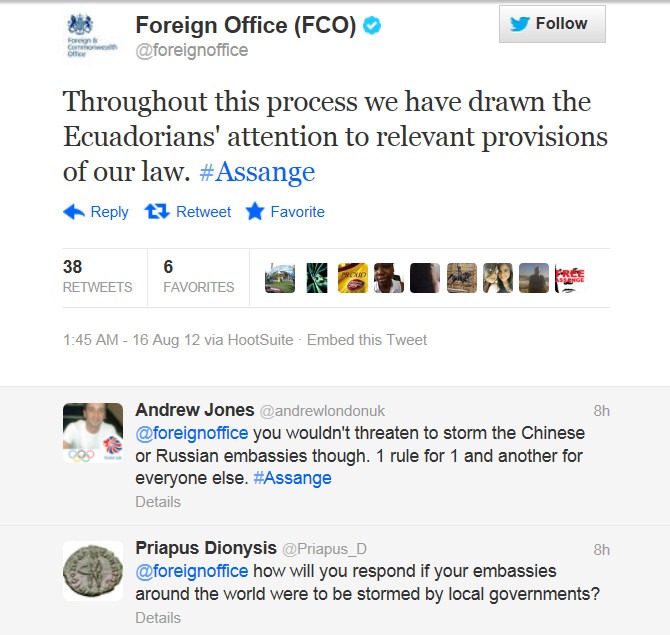 A day earlier, in a tweet in Spanish, Ecuadorian President  Correa had said: "Rumor of asylum to Assange is false. There is still no decision on the matter" in response to rumors that asylum had already been granted to Assange.

Perhaps there will be more official tweeting. Via social media, the world is watching the UK closely. In particular, South America is watching how the UK respects Ecuadorian sovereignty and international law. The UK threat against the Ecuadorian embassy is the perfect instigation for a new war of words that the UK is already losing:

From the NBC report:

"We want to be very clear, we're not a British colony. The colonial times are over," Ecuadorean Foreign Minister Ricardo Patino said in an angry statement after a meeting with President Rafael Correa.

What would a person have thougth five years ago upon reading the words "offical tweeting."


What would they have thought about a screen name of Priapus Dionysis?