Whitewash instead of bridge maintenance in Honolulu Chinatown

It was a strange morning. Setting out for a dim sum breakfast today in Chinatown, we noticed that very few cars were parked at the nearby church. Then, very few cars on the street. Where is everyone? Could they all have gone to Vegas for a long July 4 holiday? Same in Chinatown. Tai Pan, usually mobbed and with people waiting outside for a table, was no more than half full when we arrived.

After a great meal we walked over to take in the scene along Nuuanu Stream. I thought I’d see if anything has changed with the columns that Mayor Mufi made ugly by taking off their trellis tops. Nope, same ugly. More rust.

Surprise—from a distance, the top rail of the pedestrian bridge looked like it had been whitewashed. It would be a real shock to learn that at long last very needed bridge repairs had been done.

Alas, it was just a whitewash job, and mainly on the top railing. In fact, the bridge continues to decay. Pieces had already fallen into the river, and it was sad to see that a good hunk of one of the middle columns was about to dive into the drink.

Here’s the bridge. Note how the top rail was whitewashed but our government’s budget (actually, I wonder who did it…) did not extend to doing the same for the lower railing. Click on any of the pictures for larger. 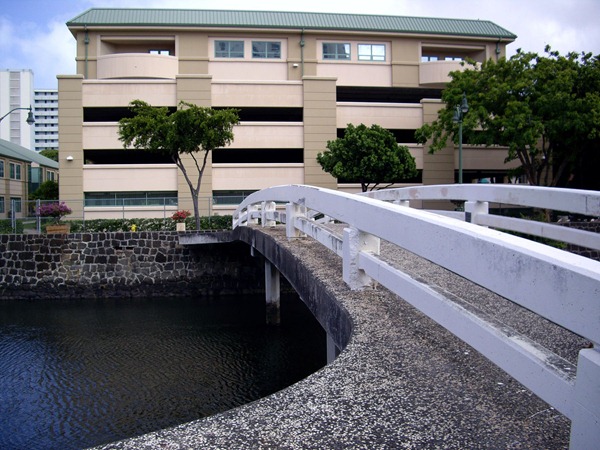 This is an enlarged view of one of the center columns. It looks like the concrete is not only cracked, but separating. 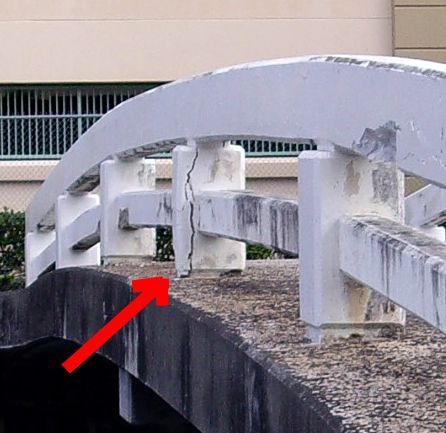 This is a side-top view. The crack is extensive and goes all the way across. 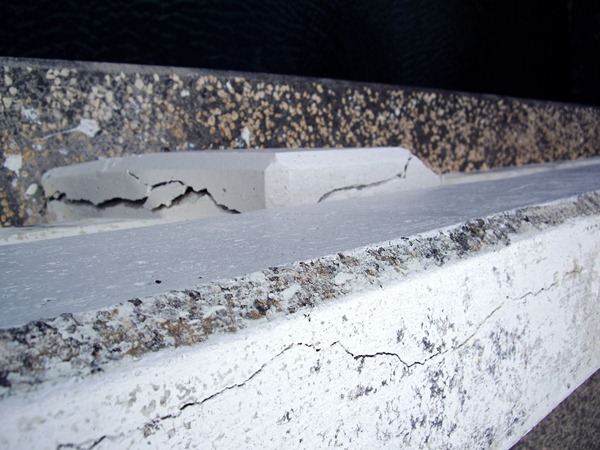 From the other side, we see that indeed, the crack goes completely through. It’s just a question of time before it separates under pressure from the rusting and expanding rebar inside. Now look at the picture above again—the top rail crack is even longer than when I last visited, and presumably goes through to the inner rebar skeleton. I hope no little kid is sitting on that railing when it gives out. 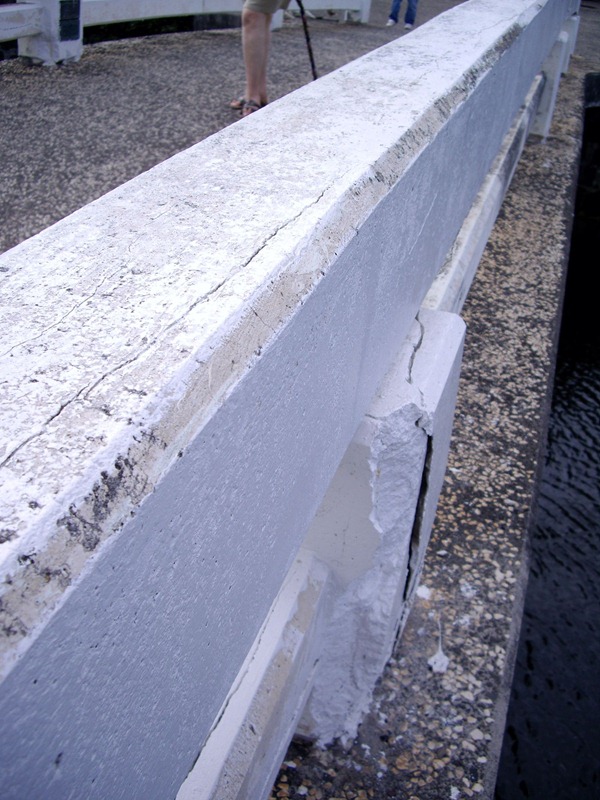 It looks like someone splashed some whitewash on a rust spot. Of course, it doesn’t work. That rust originates on the inside. 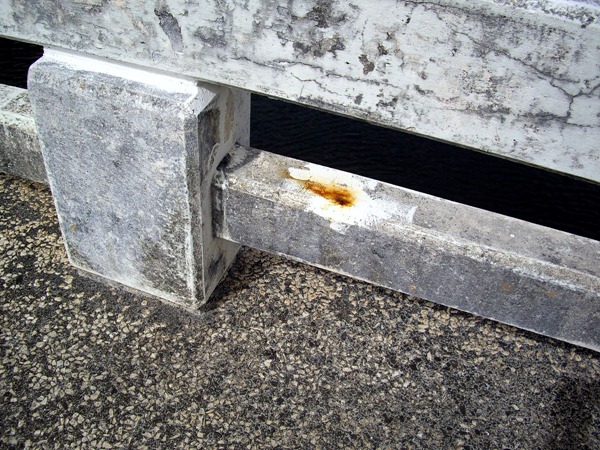 This is the final picture. The rebar in this column is exposed. It’s doomed. 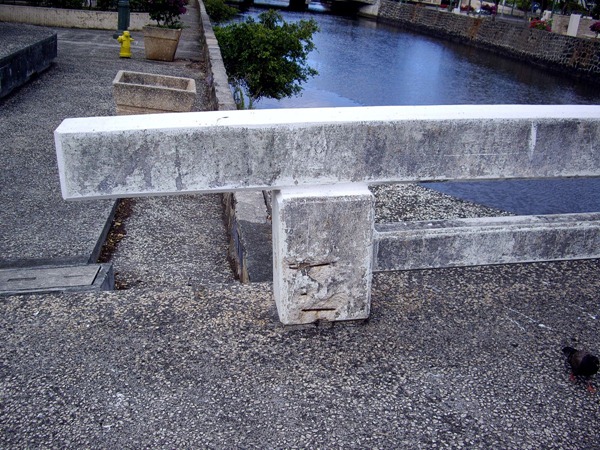 Some of the other columns have been whitewashed where a big hunk has fallen off.

“Whitewash” is the operative word here. The bridge has not been repaired. Instead, it has been allowed to continue to rot away.

Meanwhile, towards Beretania St., the usual crowd waiting to get into a very popular dim sum restaurant was absent (Vegas??). But there were men crowded around the tables playing cards, Money changed hands. Mufi made the river walk ugly by taking the trellis tops off of the covered tables, but that didn’t stop any possibly illegal activities. It just left Chinatown uglier than he found it when he was elected.

The Chinatown pedestrian bridge is just an eyesore, probably no one will be injured as the rails fall into the river. At some point, someone will have to fix it. Meanwhile, Chinatown suffers not only from lack of improvement but from noticeable neglect.

The river walk could and should be the showpiece of Chinatown. Replacing the ugly columns with covered tables and benches or chairs could create an outdoor dining and recreation scene that would bring new vendors and prosperity to the Chinese Cultural Center (installing public toilets would be a good idea too).

(image adapted from an original work by WorldinCrysis)

I agree with your suggestions for improvements, but we also need to include how to deal with the drug dealers - reason for removal of trellis tops and homeless which will invade / abuse any public restroom along with the drug dealers. Just check out the A'ala Park restroom, would you walk in or even go near it ? I doubt it. But we must not give up nor give in, I just don't know what the answer is.


Well, we have no public toilets for anyone, that is, for people with or without homes, or for tourists. I think the answer might be to have more toilets, not to eliminate them. We seem to think that we can solve our problems by taking things away from people who have almost nothing. That's not going to work, whether it is toilets, food (the gov's admonition not to feed the homeless), taking away their possessions, or taking away their benches at bus stops. We've taken away our own toilets and benches in the process. I would call that a lose-lose proposition.


Good work Larry, makes it a no brainer.
We have not encouraged reward of productive activities and now we are paying the price with lack of resources.

We have encouraged pay to play, back room deals, decisions based on favors not on maximum benefit.

And instead of people waking up, they are looking for a bigger handout, government is looking to improve economy through more gov jobs. And the push for even more corporate control through unlimited campaign contributions just pushes us in the wrong direction.

How sad. What lows do we sink to before we wake up?

PS answer is more toilet and cameras outside so basically have prosecutable images of anyone using them, and video transmitted to offsite location.......then if something happens....you find those people, it won't be as hard as it might be assumed, but will actually take some detective work, some vigilance.