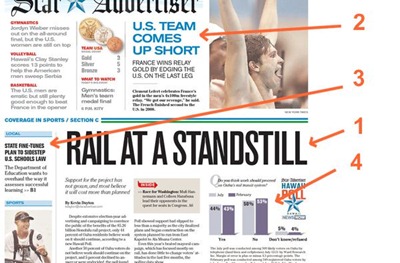 It’s seldom that a blogger is given a gift such as the front page of today’s Star-Advertiser.  It’s a great opportunity to comment on how news is covered today in our one-paper town, and to suggest to the editors that they could (and should) do better. I’m a paying subscriber, I have every right to kvetch.

Referring to numbers on the snip above—

When I reached over to pick up the paper outside my door this morning, I saw the glaring, all-caps headline “RAIL AT A STANDSTILL” and nearly toppled over in surprise. Did the court decide in favor of the no-rail plaintiffs?

I know that the headlines often are more cute than accurate.  In fact, Honolulu’s rail project is still coming at us. Nothing has happened to stop it. Who knows what the headline means.

This top-of-the-page headline, in bright color, says “U.S. TEAM COMES UP SHORT.” Hey, they won a Silver Medal! That’s fantastic! Editors, you could have said something like that. But you came up short.

This local news headlines says “STATE FINE-TUNES PLAN TO SIDESTEP U.S. SCHOOLS LAW.” Did they finally catch some kind of lawbreaking at our Department of Education? No, the DOE is just applying for a waiver of part of the No Child Left Behind law. The inside article reports that 33 states have already been granted waivers. All perfectly legal and within the law. Actually, the article affirms that the state is trying to find a way to conform to the law, not sidestep it.

Hey—it looks like opposition to rail is up—from 50% to 53%. Well, it’s a small difference. Actually, it’s the other way around. The Star-Advertiser has used this strange presentation method before—while we expect the time line to move from left to right, at their office it moves from right to left. 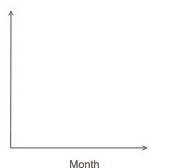 Each of us learned, from our earliest school years, that when one plots a measured value on an axis, time goes from left to right and the measured quantity increases from bottom to top. This is a universal expectation.

This is how we are conditioned to read information. To present data in a way that it cannot be easily grasped is a mistake.

Let’s look at some more examples.

Here, it looks like I should be able to tell at a glance that HMSA rates for small business are going up. Indeed, the bar on the right is noticeably higher. At the top of the sidebar is says “higher rates.”

But the graph shows no such thing. The numbers don’t relate to the bar graph. And the time axis is backwards.

Here’s another. The headline says “rail support falls” but the “Yes” side shows an increase. Yup, time is going backwards again.

Sometimes the S-A does it right, which kind of makes matters even worse. Here are three snips showing the time axis pointing the way it should—2012 is on the right. 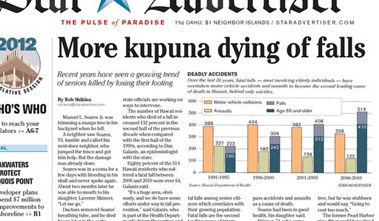 Yes, tourism numbers are up, and we grasp that fact instantly.

The paper won its Society of Professional Journalists awards only for layout this year. Hey, guys and gals, don’t endanger that.

I do need to close by recognizing the good work we do find in the paper. Now, please bring a little clarity to how data is presented.

I thought they were planning to phase out articles containing data anyway. But, oh, my lands! keep the layouts with all the pretty colors.


Thought Kauaiʻs newspaper TGI was the only one that took a nose dive and itʻs been steadily diving, not just one day.


Sorry to hear that.

It's not just one day here, but yesterday was a great opportunity for some comment. All that on one page.


.right to left from read I