The Tuesday Star-Advertiser front-page story (Star-Advertiser p. A1, Marine’s copter plan raises fear of noise, 6/12/2012) omitted perhaps the most important concern about the potential basing of these planes on Oahu—the danger that they will drop out of the sky on top of someone.

An astute and valued Disappeared News reader forwarded this article to me today: 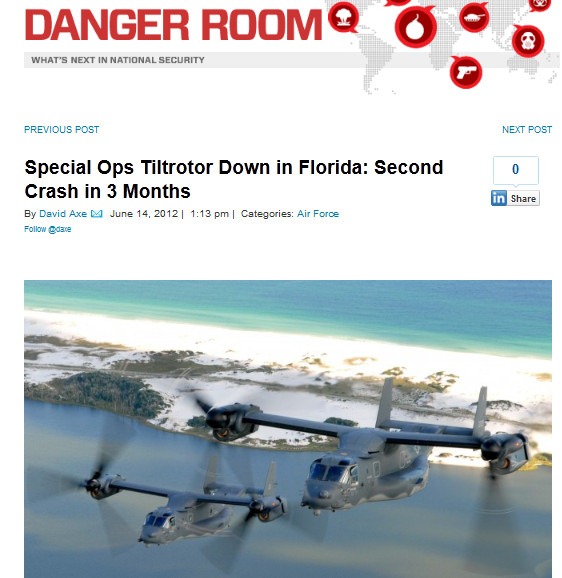 An Osprey tiltrotor belonging to Air Force Special Operations Command crashed in Florida Wednesday evening, injuring five people aboard and likely badly damaging or destroying the aircraft. It’s the second crash in three months for the controversial V-22 tiltrotor, which takes off and lands like a helicopter and cruises like an airplane thanks to its rotating wingtip engine nacelles. A Marine Corps V-22 went down in Morocco in April, killing two crew.
…
Since entering service in 2009, three of the Air Force’s roughly 20 V-22s have been destroyed or badly damaged in accidents. Likewise, in the last 10 years the Marines’ fleet of some 200 Ospreys has suffered around a dozen major accidents resulting in several destroyed aircraft and no fewer than three deaths. The Marines, who have long touted the Osprey as their “safest tactical rotorcraft,” have used semantics and fudged statistics to obscure the V-22′s true safety record.

A simple Google search could have discovered that the problems with this aircraft go beyond the noise issue reported in the newspaper. If residents are to provide informed comment on the basing of these planes in Kaneohe, they’ll need to know the full history, not just weigh in about noise.

Three out of twenty is fifteen percent. If a DC-10's were failing at that rate there would be no airline business.