Insufficient deaths to put a traffic light in Aiea??

I shouldn’t read the newspaper over breakfast. Maybe the comics are ok. And today there is are a couple of amusing ads for one-day sales that actually span two days.  Even politics doesn’t bother me much any more. But reading about how our local government costs lives gives me indigestion. 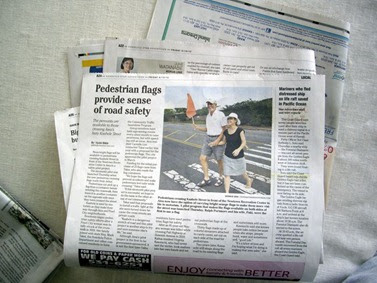 If you have a paper, grab your barf bag and check out the article on page A24. It seems that there is a dangerous intersection at Kaahele Street in Aiea where, the article points out, speeding is an issue. Please also note the disappearing paint in the crosswalk—that can’t help much either.

The article doesn’t say how many pedestrians have been injured or died at the intersection, only that it has been of extreme concern to the neighborhood residents, who have mounted an awareness program.

So the problem is speeding. The answer? None from the city, it seems. State Rep. Mark Takai has made up some flags and flag containers for pedestrians to wave at motorists. While I applaud his taking action, it’s the wrong approach. Why flags where there should be a traffic light and enforcement of the speed laws? Flags have been widely used in Japan for decades, but at the same time, Japanese motorists are not speeders.


Takai said that proposals to install a traffic light at the site were turned down because the cross streets are private roads.

"Kaahele is a dangerous stretch of road and this pilot project is another step to try and save someone else's life," he said.

This is a familiar refrain in Honolulu and a massive failure of government. While police continue to allow unchecked speeding, the city, for its part, refuses to install traffic lights or other measures to protect pedestrians in crosswalks.

The city sets regular records for senior citizen pedestrian deaths while those responsible in the Departments of Transportation and HPD continue to hold down their jobs.

If it were up to me, I’d make the police commissioner a crossing guard at that intersection at Kaahele Street, or along Farrington Highway, or at any of the other recognized danger spots where he won’t station a motorcycle cop with a ticket pad. Let him stare down the speeding motorists and see if it works.

Look, we can’t do much about the carnage in the mid-East, or even the civilian deaths caused by our own soldiers. But here on Oahu, we should at least get the protection we deserve and pay for from our local officials. Here, we ought to be able to make a difference, whether it is by stopping our Governor from killing Micronesians by denying them health benefits  or by replacing officials in our Departments of Transportation and police department who refuse to protect pedestrians unless an undisclosed number are killed at a particular intersection.

Rep. Takai is a very caring person, I follow his efforts at the Legislature. I wish he would make some flags for people to use to picket City Hall until they do the jobs we pay them for.

apparently its only an issue now 20 years later because K Mark Takai actually has to run a competitive primary.


I wish someone would look at the issue of having to push a button every time you want to get the "walk" sign at an intersection. Do we ask driver to push a button every time they are waiting at a red light.
This practice has created two different classes of citizens. The ones with and the ones without a car and guess who is treated as a priority? I recently took a long walk and could not believe how often I had
to push the button in order to get the "walk" sign.


Yes. I feel the same. Pedestrians are second-class citizens on Honolulu streets. One of the e2 Transport video snips I posted includes a statement that there are no pedestrian buttons in Portland -- by design.


Don't you get extra "points" for running over those holding flags?