A novel warning for Hawaii

A novel about a radical wing of the Hawaiian sovereignty movement that blows up a hotel in Waikiki is a finalist in a major online writing competition.

"A Chant of Love and Lamentation" was written by Brian Reeves, who studied at the University of Hawaii in 1994, taught at Chaminade University in 2007 and 2008 and now lives in Portland, Ore.

You never know what tomorrow may bring. While there may be no radicals waiting in the wings to blow up a hotel in Waikiki that we know of, still, something could happen.We live in uncertain times.

As I’ve pointed out in other articles, if there should be any kind of bombing in Waikiki, even if no damage or loss of life results, it could be devastating to tourism. Or a natural disaster could strike. Kauai knows that scenario well. Then what would we do?

Hawaii has two major sources of income: tourism and support services to the military. Without this income we’d be living in the same poverty that typically afflicts isolated islands anywhere in the world. We have no guano to sell. We have nothing to replace tourism. We’re very lucky to have tourism, but it’s risky being so dependent on one source of income.

We also have little resiliency, no reserves to see us through. The city of Honolulu is embarking on a giant and potentially ruinous development-driven project that pushes city finances to the edge, and it’s not even built yet. The city is even cutting back on bus service and will borrow to pay for the train. There’s no fat in the city budget, apparently.

Given our isolation and dependence on a single industry for survival, you’d think we’d be taking sensible measures to build a cushion of reserve for any eventuality. A downturn in tourism seems unlikely but would be devastating to the economy.

Here’s a short list of concerns that I have, threats to sustainability:

Despite the efforts of dedicated advocates, there is no regime of rent control or rent stabilization combined with low-income housing generation on the island. The city of Honolulu has no solution to homelessness except to confiscate and destroy personal possessions.

How does this put people in housing? It doesn’t, and the city doesn’t care. In the event of a severe downturn in the economy there is no planned solution to the demand for low-income housing that will result, and no plan to freeze rents from inevitable increases.

The greed of developers and the willingness of politicians to sell out is behind the race to pave the island over beyond sensible limits. “Job creation” is only the current mantra—these projects have been planned for years. Developers and government both joke about “affordable housing” which is, in fact, unaffordable to those who need it.

Far from taking traffic control measures or reducing the number of cars (through limits on development or comprehensive urban planning), government is consciously adding cars to the roads and ignoring the predictable results.

There is no comparable pressure on the part of government at any level to ramp up food production. Quite the opposite. Sustainability has just suffered a one-two punch this past week as development (paving over) wins against food: 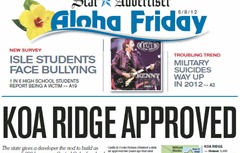 There’s also a string of shortsighted failures-in-progress that threaten our resiliency. The proposed inter-island undersea cable is one of them because it promises to increase, not decrease, the cost of electricity to ratepayers. Again, politicians seem to have caved to developers. Their profit will be at the expense of ratepayers including individuals and small businesses. Taxpayers will also have to pay more because government runs on electricity (and uses it inefficiently). The money paid out to HECO could instead go into personal reserves to help families survive now and in the event of an unexpected downturn in the economy.

Another energy-related failure is unfolding as individual homeowners and businesses install solar power on their rooftops, and we find out that because of that, the rest of us could have higher electric bills.

“Hawaiian Electric Co. customers installed a record amount of solar power generating capacity on their rooftops last year, causing a reduction in utility revenue that HECO says it will have to make up with an increase in rates.
…
While the homeowners and businesses that installed photovoltaic panels shaved millions of dollars off their electric bills, their savings translated into a loss of $7.4 million of revenue that HECO would have normally used to pay for fixed costs, such as meter reading and billing.

(A few days later HECO flip-flopped apparently and denied it would increase rates.)

Solar panels are more and more economical—a PBS program noted that in New York, at 16 cents per kilowatt-hour, solar is the same as purchasing electricity. In other places, it is already more economical. Common sense would suggest that if Oahu pays 35 cents per kilowatt-hour, solar should help us reduce our energy costs, not increase them. The same program mentioned the decreasing costs of natural gas. In fact, natural gas is now so cheap that new wells (the controversial “fracking” method of extraction) in Pennsylvania are not being drilled, according to the interviewee. Although extracting natural gas is not a clean process, and it still is an imported source of energy, wouldn’t we be better off if our electric bills could be reduced?

But would that happen? Just looking at the regulatory deals our government is willing to make on behalf of HECO makes me wonder if we’d end up paying more, not less, if somebody sets up a natural-gas driven generator to compete with HECO. Can’t happen? Well, how come our bill goes up as more solar is installed? How come our bill will go up, not down, to pay for wind energy via undersea cable? What’s wrong with government in Hawaii anyway?

We know that our dependence on high-priced oil hurts our economy and is a threat to survival in a disaster, yet we continue to support HECO’s profit at all costs over the concerns of our citizens.

I asked myself, “whose side are they on?” but the answer is obvious. As citizens, we might think of how to protect our own interests in this fragile economy.