Civil Beat posted a great article today with background on Honolulu’s failure to control its light pollution: Hawaii Astronomers and Animals Vexed by Oahu's Blazing Lights (12/27/2011). Check it out. There was a bill in the last legislative session addressing the problem, but Governor Abercrombie vetoed it, apparently for good reason.

I’m glad to see Civil Beat’s coverage. I’ve also written several articles, emphasizing that the city is ages behind modern lighting technology. There’s no need to light up the sky, and no excuse for using decades-old lighting technology. Many other states and municipalities have dealt with their light pollution issues, including, in many instances, passing ordinances against “light trespass”—that is, the spill of powerful lights into the windows of nearby homes.

Aside from killing birds and spoiling astronomy, lighting up the skies is a huge waste of taxpayer money. The light should be directed downwards, onto the stadium grounds or onto the streets where it is needed. By installing properly engineered lighting systems, fewer lights are needed, saving us all money.

Remember—we pay the highest electricity rates in the nation. Why should we waste money with mediaeval engineering design?

In Why doesn’t Honolulu conserve energy/water? (3/24/2009) I lumped the waste of electricity together with Honolulu’s profligate waste of water. You’ve probably seen how much water spills off onto (for example) Nimitz Highway because it’s not directed onto the grass where it’s needed.

In Light trespass, killing birds, and Hawaii’s old-fashioned technology (12/26/2010) I sketched out (literally, on my tablet screen) how proper lighting is designed, including a snip of a manufacturer’s ad showing how modern lighting fixtures direct light downward with correct reflector design. Check out that pic to see what Honolulu isn’t doing.

How bad is it?  Here are some photos taken from my condo window. I’m on an upper floor, so any light shining in my window is a total waste of money.  These pictures are current. Click for larger views. 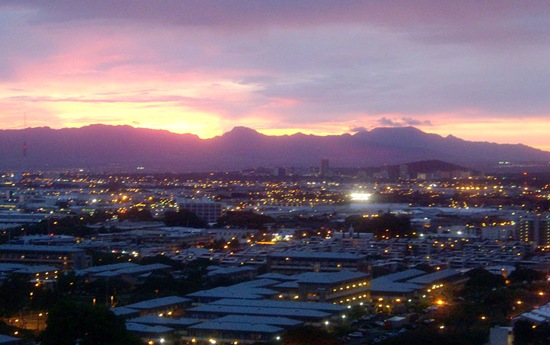 It’s hard to shoot a great sunset with a simple camera, but don’t be distracted. The objective of this shot is to show that there is a huge bank of lights shining right at me. Digital photos lack dynamic range, so you can’t see how bright it is. 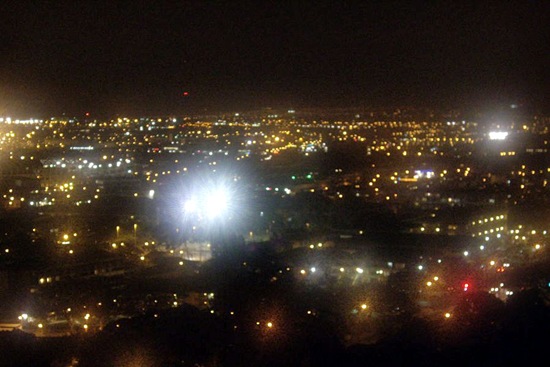 This pic is of a sports field at a park just three blocks from the condo. Again, a camera can’t show how bright the lights are, but you can see how they smear the image. That light should be directed onto the playing field, but it isn’t. It’s lighting up the sky, and for no good reason. 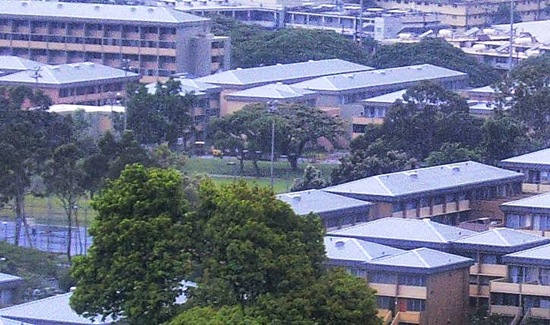 Same field, but during the daytime. The offending lights are in the center. The fixtures are cheap. Maybe the contract went to the lowest bidder. But we pay again and again every time they flip the switch to “On.”

I’ll close with this snip of a manufacturer’s ad, from one of the earlier articles, showing how easy it is to do it right.

Through proper fixture design, light is cast onto the playing field where it is wanted—and nowhere else.  To get the ad photo the photographer likely had to shoot on a rainy or foggy day, usually the path of the light is not visible.

Reducing spill light is a good deal all around. For new installations, it saves taxpayers by not wasting energy. For existing installations, it could save money, but of course, existing poles have to be retrofitted. If older lamps are replaced with new LED fixtures, we save even more.

Dear readers: if you live in Honolulu, it is your money the city is wasting by lighting up the sky. May I suggest contacting Sen. Espero, mentioned in the Civil Beat article, and lending your support to an improved bill to be passed this legislative session.

It's not just park lights that are glaring -- street lights do the same
thing. The city follows certain guidelines to determine how much light is
required on any given street. With respect to the Lunalilo Home Road street
lighting project, however, the city went above and well beyond what was
required. The plans initially included three times as much light as was
originally installed.

After many questions and community protests, the city reduced the amount of
lighting to double on part and 40% more on another part of the project, but
one question has never been answered -- why did the city plan for three
times the amount of light when much less was required?