Transit lessons for Honolulu from the classics

“We do not ride on the railroad; it rides upon us.”—from Walden, by Henry David Thoreau 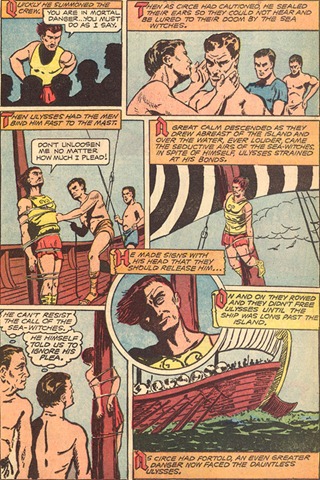 I have to admit that I made it through high school English classes with the help of Classics Illustrated comics. For example, I just didn’t want to spend the time reading The Odyssey by Homer. I tried, really I did, but my true feeling was that this old literature should be respected but not imposed on modern kids.

Fortunately, we had excellent alternative resources available to us. No, not Google or Wikipedia, but Classics Illustrated comics. For a few cents I might even enjoy the stale old classics while getting up to speed enough to pass the quiz. In class discussions I really sounded as though I knew what I was talking about.

Probably, teachers were on to this, but what could they do? I held a paperback copy of the actual Odyssey in my hands and could find a key passage if called upon. I could fake it each time, and I did.

In the illustration above (click for larger), Odysseus stuffs the ears of his crew with beeswax so they will not hear the songs of the Sirens as their ship passes their island, and has them strap him to the mast so he can enjoy it, instructing them not to cut him down no matter how much he implores. If they were to succumb and turn the ship to the island, they would perish.

In his notebooks Leonardo da Vinci wrote of the Siren, "The siren sings so sweetly that she lulls the mariners to sleep; then she climbs upon the ships and kills the sleeping mariners."

Certainly, this can be a metaphor for Honolulu’s rail project. Who could resist the promise of reduced traffic on the highways that the rail sirens sing? And given the cost, both economic and to the environment, wouldn’t we perish if we succumbed to that enticing song?

This morning we caught up with the podcast of Wait Wait Don’t Tell Me, in which one of the questions asked of a contestant mentioned this short quotation from Henry David Thoreau’s Walden:

“We do not ride on the railroad; it rides upon us.”

Walden was one of the few books assigned in class that I actually read. Thoreau made a lot of sense to me. And, well, because there wasn’t a Classics Illustrated comic I could substitute for actually reading the book. Nevermind. Just give me some credit. I really did read the book.

So I decided to look up the text on Project Gutenberg to see what Thoreau was getting at. He mentions railroads at several points (the on-line text is searchable, a great technological advance over the original). He seems to have an understanding not only of their utility but of their consequences.

There could be some lessons for us in this book also.

To make a railroad round the world available to all mankind is equivalent to grading the whole surface of the planet. Men have an indistinct notion that if they keep up this activity of joint stocks and spades long enough all will at length ride somewhere, in next to no time, and for nothing; but though a crowd rushes to the depot, and the conductor shouts "All aboard!" when the smoke is blown away and the vapor condensed, it will be perceived that a few are riding, but the rest are run over—and it will be called, and will be, "A melancholy accident."

In our current context, the Honolulu train, as proposed, would indeed have the effect of “grading the whole surface” of Oahu. Or at least a large chunk near where the train will go. It’s not just the space under the tracks, but the increased value of the land nearby that has lead to a great salivation on the part of developers and the politicians whom they support.

It will also come to pass that “a few are riding, but the rest are run over.” Not just the iwi  who will most literally be run over, but the rest of us, whether we live near a train station or not, will have to pay dearly so that a few can ride. Many will not be able to afford it. For those, Thoreau has a useful suggestion:

I used to see a large box by the railroad, six feet long by three wide, in which the laborers locked up their tools at night; and it suggested to me that every man who was hard pushed might get such a one for a dollar, and, having bored a few auger holes in it, to admit the air at least, get into it when it rained and at night, and hook down the lid, and so have freedom in his love, and in his soul be free.

Good idea for Thoreau, perhaps, but our City Council would probably pass a law to confiscate the dwellings, since that’s their solution to poverty and homelessness in this town.

Now, much of this would hold for any form of rail transit. We’ve been warned, though, about the high expense and environmental degradation that this particular plan will bring with it. The expense, along with the design, practically guarantees that the line will not be extended and so will serve only a few. At the same time as we have to pay for the existing rail we will still have to pay for replacing sewers and for the higher cost of electricity that the state legislature is setting us up for in their “wisdom” by clearing the way for an expensive undersea power cable.

It could be a devastating combination of financial impacts, and it would do damage to the income of ordinary families, many already struggling in today’s economy.

So that’s the consequence if we answer the Siren song to build this train. The traffic won’t go away, but we will suffer the predicted fate. It’s not that we haven’t been warned, we have. But instead of resisting, we may succumb. It’s easy to listen to a pleasant song and feel good in the moment. Homer warned us not to do that. Thoreau picked up and modernized the warning:

With unrelaxed nerves, with morning vigor, sail by it, looking another way, tied to the mast like Ulysses. If the engine whistles, let it whistle till it is hoarse for its pains. If the bell rings, why should we run? We will consider what kind of music they are like. …

Although Thoreau went on and on, I’ll stop here, with thanks to the folks at Wait Wait for putting me on the trail. The classics have plenty of lessons for us, but so does common sense.

Sailors who listened to the Siren’s call succumbed. We ignore these lessons at our peril.