Rant: Flashback to an era of public transit that worked

New York City just posted an archive of over 870,000 images spanning 160 years on its website (hat tip to researchbuzz.com). So I thought I would take a journey on the time machine to check out some of the transportation I remember we had as a kid. Why? It worked then. New York City knows transit. It would never put a line to nowhere up in the air as Honolulu is planning. I felt like escaping from the folly by going back to those comfortable days of yesteryear as a commuter in Brooklyn, NY.

At one time, portions of Brooklyn and Queens were as rural as Oahu is. Yet somehow planners managed to get the city interconnected with a web of urban transit.

Of course, I’m still thinking of Mufi’s train. Since it would be one single spaghetti-strand of a line with no future of expansion, that will condemn most residents to either driving or taking a bus to get to the train. That’s what my mom warned against.

Later, we moved to Coney Island. There was a train a block away and another line nearby (you could walk or just change trains). How convenient! True, it was a long way from Manhattan where I worked, but not so bad. There was a newsstand at the station so it was an opportunity to read the New York Times on the way in to the city.

I recall (could be wrong) that we could pay the trolley or the bus fare with subway tokens. This is a 15 cent token. It was about the size of a dime. When the fare later went up, the size of the token would be changed. I saved a few of the 15 cent ones, silver plated some and soldered them to a tie clip which I wore for years, until for some reason people stopped wearing tie clips. Subway tokens were a great idea. You just tossed them into the fare box. People would depart the car from the rear (unlike The Bus in Honolulu), so that passengers could get on quickly at the front, toss a token into the fare box, and move to the middle. We have not caught up with that simple concept here in Honolulu in 2012. Oh, while I’m at it, there were ways to signal the driver to stop so you could get off, even if you were standing. That’s another thing we don’t have yet on The Bus.

Back to the 870,000 pictures… most are of old buildings, so I looked up the theater on Utica Avenue where we went on Saturdays to see three cartoons for 25 cents including free popcorn. No picture. It was converted to be a supermarket, and there are pictures on the web of that.

But there was one great picture of the Church Avenue trolley: 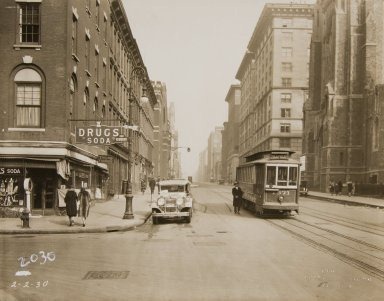 Where are the overhead wires??? Actually, I should ask where are the horses, I think it was pulled by horses then.

And I found this cool article about an incident between a runaway trolley car and a milk truck.

The trolley I remember looked more or less like this: 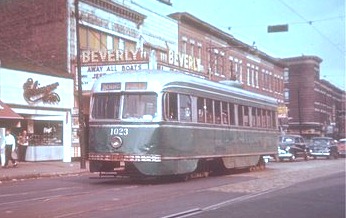 It was replaced by a bus, which I had to ride to the subway to get into school in Manhattan I remember the last run. I saw the trolley depart and go down the avenue with people hanging out of it.  I also remember all the pennies we had put on the tracks over the years and other clever stunts I better not mention, even though the statute of limitations has long tolled. I never tried it, but some boys used to ride on the back bumper, without, of course, paying anything. The ride was smooth enough (no potholes when riding on rails, of course) that it didn’t seem dangerous, and cars behind left plenty of space if there were idiot kids riding outboard.

The trolley was cool. The diesel buses stank, were noisy, and didn’t ring a bell before they moved.

For many years the trolley tracks remained in the street. Then the city decided it would be too expensive to pull them up, so it covered the streets with a layer of asphalt. This was successful only for a while. The tracks often buckled and forced their way up out of the asphalt. So the errant rail would be ripped out and the street repaired. But then another rail would pop up, then another.

For a time, though, I could line up my 1963 Plymouth on the tracks on Stillwell Avenue, which remained in place after other streets were repaired. It was a coincidence, I’m sure, but the width of the tracks, from the outsides of the rails, was exactly the same as the space inside between the left and right tires on the car. So the car would lock onto the rails as though it were a train. I could take my hands off the steering wheel, and it would run safely down the street, with something of the feel of being on a train. The problem came when I had to make a turn. It took significant force to unlock the car from the rails.

Somehow, I don’t think we’ll have such fun with Mufi’s train. You never know. I wonder if they’ll relent and put public toilets in the stations. If not, yes, there will be stories for tourists and residents to tell.