Hawaii at great risk if another quake hits Fukushima

Could Tokyo be evacuated if there were another earthquake affecting the Fukushima nuclear plants? What can be said about the probability of another earthquake, and what would the consequences be for Japan, for Hawaii, and for the rest of the world?

For Hawaii, would tourists come if the ocean water were too radioactive to swim in? What kind of an economy would we have without tourists, and where would we go to surf? Do Hazmat suits come in aloha shirt patterns?

A coalition of Japanese citizens, Japanese and American activists and US Senator Ron Wyden sent a letter Friday to UN Secretary General Ban Ki-moon and Japanese Prime Minister Yoshihito Noda urging intervention to remove the spent fuel rods from Fukushima 4 sooner than the ten years or so currently contemplated.

The letter warns that the reactor building is tilted and it could not withstand another earthquake. The storage pool is located above the building at a height of six to ten stories above the ground and open to the air. More than 1500 nuclear assemblies are inside the pool. Should the pool be damaged and the fuel rods catch fire, roughly 85 times the amount of Cesium 137 released by Chernobyl could be released as the fire spreads to the other nearby units.

US Senator Ron Wyden (D-OR) visited the stricken Fukushima site several weeks ago and was particularly alarmed by the slow response of Fukushima Daiichi utility owner, Tokyo Electric Power Company (TEPCO), which has a several year-long plan to secure Unit 4 and its fuel pool, and urged swifter action.

"Loss of containment in any of these pools, especially the pool at Unit 4, which has the highest inventory of hottest fuel, could result in an even greater release of radiation than the initial incident," Wyden said.

The letter to UN Secretary General Ban-Ki Moon and Japanese Prime Minister Yoshihiko Noda, initiated by Japanese environmental groups Green Action Japan and Shut Tomari, demands that Japan ask for international support to avert disaster. The groups are urging organizations around the world to sign on.

Hawaii should consider signing on in some official capacity. The downside risk of an event such as described would be devastating here.

Hawaii is directly in the path of the radioactive plume of seawater from the original Fukushima disaster. It would similarly receive radioactive water from a future disaster.

Water contaminated by radioactivity that entered the sea from the Fukushima No. 1 nuclear plant will reach the Hawaiian Islands in March 2014, according to a computer simulation by the Japan Atomic Energy Agency. [...]

The researchers said 18,000 trillion becquerels of radioactive iodine and cesium have leaked from the plant into the sea.

The contaminated water will be carried by ocean currents, and the maximum radioactivity level in cesium-137 will be about 0.04 becquerel per liter when it nears the Hawaiian Islands, they said.

That would be about 50% of the EPA’s maximum limit for drinking water.

The letter sent Friday appears to be the second one sent by the groups. The text of the first letter is here. One of the signers appears to be “Aloha from Hawaii.”

The letters urge immediate action because another earthquake near Fukushima could occur at any time. If a worst-case disaster at the Fukushima facility were to take place, it is hard to see how Tokyo could be evacuated. The population of the greater Tokyo metropolitan area, including nearby Yokohama and Kawasaki, is estimated to be between 35 and 36 million people. It is the largest metropolitan area in the world. There is no place for them to go, and an evacuation would be a logistics nightmare, if it could be accomplished at all.

How likely is another earthquake? Of course, no one can say exactly. Here is the currently posted USGS Seismic Hazard Map for Japan: 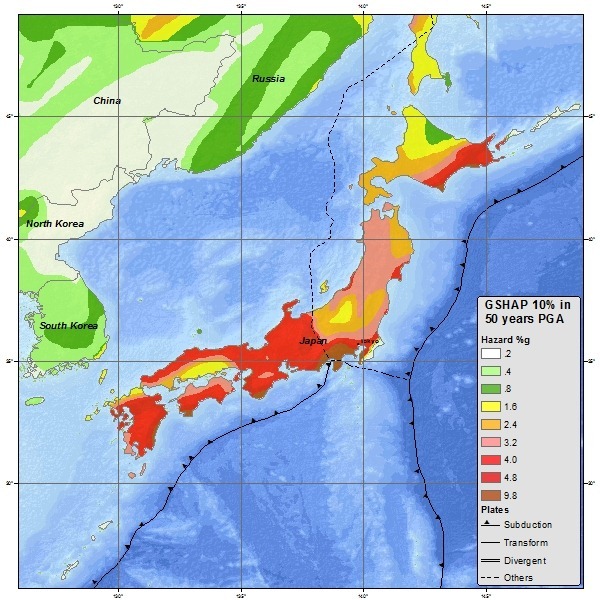 The likelihood of another earthquake should be the subject of more research, but the argument presented by the various groups is that the downside risk is so great that international assistance should be provided to stabilize the situation at Fukushima as soon as possible.

Meanwhile, the media are generally ignoring the situation.

There is no way to overstate the media's complicity in concealing critical information about the tragedy that is presently unfolding at Fukushima. If there is another earthquake, the media will certainly be every bit as responsible as the government officials who saw the danger, but chose to do nothing.

This is too important for the media to ignore. The consequence of leaving TEPCO (nearly bankrupt already) and the Japanese government to deal with Fukushima on their own could be disaster for Hawaii and much of the world economy. We should join with other groups to move that ten-year timetable forward and deal with the situation sooner, not later.