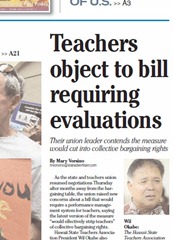 Today’s lead story in the Star-Advertiser is “Teachers object to bill requiring evaluations: Their union leader contends the measure would cut into collective bargaining rights.”

It’s even worse than that. The devil is not only in the details, but in the underlying plot to sideline the teachers union in the name of “school reform” big-business style.

SB2789 must be viewed in the context of SB1485/Act 148 passed in the 2011 session. Taken together, these two bills permit the Board of Education to fire teachers without regard to the protections of collective bargaining agreements. In fact, Act 148 would not have effect unless the Legislature also passes a bill like SB2789. The two work in tandem to create a system in which teachers would lose their jobs whether or not they were performing at the top of their class.

This section of Act 148 is already law in Hawaii:

§302A- Reconstituting schools. (a) Notwithstanding collective bargaining agreements, memorandums of agreement, or memorandums of understanding, the superintendent may reconstitute a public school, except a charter school, that has been in restructuring under the No Child Left Behind Act of 2001, Public Law 107-110, for four or more school years

“Reconstruction” is defined in the Act to include:

(1) Replacing all or most of the staff, including
teachers, principals, and other support staff;

(2) Entering into a contract with a private entity to
manage the school; and

(3) Changing the membership of the school community.
council.

This Act falls in line with what were originally Republican initiatives to privatize public education. It is unabashedly aimed at satisfying the US DOE requirements for “Race to the Top” funds, which is an Obama-administration policy amplifying Bush’s No Child Left Behind. Superintendent Katherine Matayoshi, who was appointed without a background in pedagogy, admitted this objective in her testimony to the 2011 Legislature:

“Passage of this bill will further demonstrate the support and commitment of the Hawaii State Legislature for transformative educational reform outlined in the Hawaii Race to the Top application.”

The preamble to the current bill is unabashedly a pander to the federal Department of Education’s “Race to the Top” grant. The bill also amends the law so that it will be the school board, which lacks pedagogical credentials and is chaired by a businessman, that determines how teachers will be measured rather than the Department of Education for whom teachers work:

SECTION 2. Section 302A-1004, Hawaii Revised Statutes, is amended by amending subsection (a) to read as follows:

"(a) The [department] board shall implement a comprehensive system of educational accountability to motivate and support the improved performance of students and the education system.

The performance of students and hence of a particular school may be far more influenced by factors including poverty, a culture of non-attendance, and a discounting of the value of education in a particular community, all of which we find in some measure in Hawaii. Student performance may also be impacted by the lack of job prospects in the state.

The quality of teaching has nothing to do with these factors, although of course it is also critical to student success. Teachers can’t teach students who are not in school, for example, but this bill is aimed solely at replacing teachers as a remedy.

Secretary Duncan leads the chorus of "teachers are the most important factor in student achievement" despite ample evidence that teacher influence on measurable student outcomes, tests, is only about 10-20%. This refrain serves two purposes for the "No Excuses" Reformers: (1) Deflect attention from the 60-80% influence that out-of-school factors play in student achievement, and (2) insure that teachers are de-professionalized, thus creating a cheap labor force for a privatized education system.

(See more on this in The national conspiracy to break teachers’ unions reaches Hawaii, 1/28/2012.)

Since little is or can be done to control the major influences on student performance in some schools, the two bills taken together amount to a license to fire teachers regardless of collective bargaining constraints.

Teachers who understand this are justifiably wary.

The “reform” bill is not just a union issue—parents should be equally concerned because these so-called “market-based reforms” have not improved the quality of education (see above article). “Race to the Top” is a program of bribes intended to advance these reforms. A b 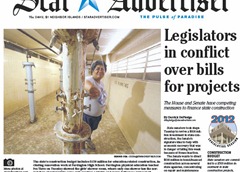 etter alternative would have been to provide funding to support evidence-based programs that can meaningfully contribute to student receptivity to the education available to them. Hawaii’s horrible support for schools and teachers certainly militates against student success as well—look at the disgusting conditions in the girls’ shower room in the front-page picture in Wednesday’s Star-Advertiser as an example.

Overheated classrooms, missing, broken or outdated equipment, broken windows, insufficient textbooks—these and similar factors do not figure into the proposed new bill, only teacher evaluation. It is very reasonable for teachers to question the Legislator’s motives in advancing this bill.

i'm not sure i follow. "replacing" teachers at a particular school is different than firing them. it seems likely they would merely be moved or transferred to another school site since the CBA doesn't permit firing unless it complies with the CBA requirements and courts will go to lengths to allow a construction of both a statute and a CBA that avoids rendering either of them void (since public CB is a right under the Hawaii State Constitution). unless i'm missing something here, i don't think the union bustingness of the bill is direct as HSTA would like us to believe. that being said, while i don't disagree that federal education policy doesn't support educational reform consistent with empirical research in education, i don't think HSTA has been very proactive in offering alternative solutions that the public can rally around. it might be helpful if they told us how they think the system should run ideally and the reasons.


This sounds much like what Governor Scott Walker has been doing to teachers and other union members in Wisconsin, that brought thousands of citizens out in protest at their capitol in the dead of winter. Walker, supported by the Koch brothers, is now facing a recall election which may throw him onto the street along with many of his underlings who are under indictment.
Where are our protesters? Are we really so lame and foolish as to not see what is in front of our faces? In Hawai'i, who needs bad guy republicans when we have our own 'team' of fake democrats ready to feed us to the wolves?!
Oh yes, when its election time they will lie through their teeth to get you out on the highway to wave signs for them and constantly hit you up for more money but disappear when its time to defend their constituents. This article makes me ill.
P.S. I am not a union member, I just know a bad deal when I see one.

The issue is that the Legislature and Governor are pushing the limits of CB law. Can the Legislature pass laws that circumvent the collective bargaining process? They did in last year's extended school day and year law, and the reconstitution law, as Larry points out, opens the door for that to happen as well. HSTA is challenging how both the leg and the gov are trying to move their agenda w/o going thru CB. The lawsuit with HLRB by HSTA is an attempt to define the boundaries of what they think they can do. The calendar issue, the BOE passing it w/o consulting HSTA, is another indication that they want to do thins their way. Is it surprising that the gov was for the appointed school board? They are now doing his bidding. Alternative solutions? If you are talking about teacher evaluation, this is a developing concept. Nea has a policy statement, which is long and detailed, but HSTA could condense it into understandable message pieces for the public. Myself, I am a teacher, and I like the current evaluation system, but it needs to be more frequent and if doe wants to get rid of "bad" teachers, then they just need to follow due process, and do it. Professional educators want colleagues they trust and admire, not ones who make us look bad.