I do a Google search. It completes in .048 seconds and produces tens of thousands of hits. Nowadays we take this as routine, rather than the miracle it represents. Think of it—millions of transistors lined up to do your bidding, searching a universe of data. It’s quick, and low-cost. Sure, they’ll show some ads, but all this computer power is at our fingertips essentially for free.

In the old days, a search could take hours. The electric bill was high. Behind that search would be a staff of at least one operator, backed up by field engineers who kept the machine running.

Let’s escape back to those days of yesteryear, when metallic monsters dominated computer centers, data was stored on reels of tape, and the floors were littered with chads. Just scroll your finger down the iPad screen and read on.

When the computer arrived at my college, a battle began.

The Chemistry Department head wanted almost exclusive use of the machine, an IBM 7040, to satisfy their voracious computational needs. Other departments wanted time on it as well, of course. The internecine strife was ugly.

“Time” meant that a part of the day was set aside to run each department’s programs. These “jobs”were fed in via punch cards. They would either run for a while, or annoyingly, after feeding in cards for 30 minutes or so, produce pages of error messages because a comma was omitted someplace in the huge deck. So you got back your deck along with a huge pile of paper and had to find and correct the comma and try again. Of course, it might throw out the job next time for some other reason. So you fix and repeat until the machine eats the whole deck and actually begins to compute.

A good day was when you punched up a program and it did what you intended it to do first time. That much hasn’t changed very much to this day.

While the departments fought over their slice of the machine, we students were completely sidelined. In one of my earliest activist projects I organized students to demand a course in Fortran so that we could also use the computer, and I participated in that first class. So Fortran was my native computer language. Yes, my first job was to print “Hello world.” Except I printed it on the console instead of the printer and got reprimanded by the operator. That was his console to print on, not mine.

The operator kept his overcoat and umbrella in Logic Compartment 3, which was as yet unused in the school’s setup. One day during a high-level tour by outside educational bigwigs, the operator decided to go home, opened the side panel of the computer, put on his overcoat and heavy shoes, and left. It kind of spoiled things to know that 1/3 of the computer was being used as a closet.

But let me drag you back to those days of yesteryear when computing in the business world was a job for real programmers. Here we go.

This is a punch card:

People sat at a machine and typed stuff which was represented by these little holes in the card. Cards were finicky. There was little tolerance for mispunched cards, and they had to be put into equipment in a certain way, of course—say, 9-edge face down—or your time on the machine would be wasted. As students, a misplaced or mispunched card in a deck could cost us several days to a week before our time slot came up again.  So we learned to be careful and deliberate, and to check and double-check our work, skills that are valuable in life anyway.

Cards decks were carried around in cardboard boxes. Unlike a CD or USB stick, you didn’t want to drop a box of punch cards. Especially when the wind was blowing, or over a subway grating. Yes, people carried these boxes around all over New York City. I remember seeing a guy on Lexington Avenue distracted by an attractive woman, smash into another guy distracted by the same woman. Their boxes of cards broke open, mixed, and blew all over the place. This can no longer happen. For one thing, both of them would have their eyes fixed on their smartphones and miss the attractions around them.

Ok, kiddies, let’s look at how people computed in those days.

Below is an accounting report, which just picks up data from certain areas of the card. The machine (an IBM 402 Accounting Machine) could do arithmetic on these fields. 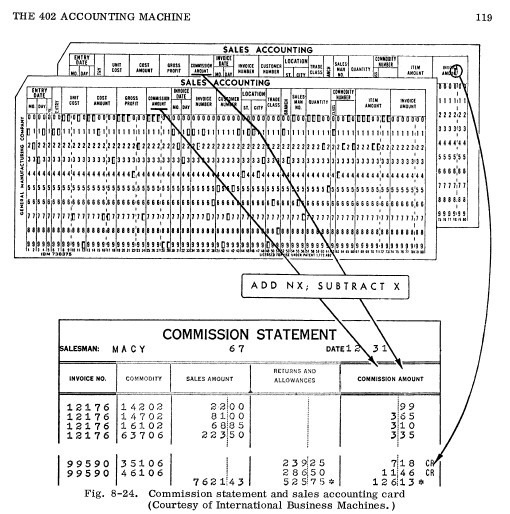 Piece of cake with today’s tools, of course. A few lines of code will produce the report. How was it done back then?

By wiring the panels in the machine. I kid you not.

Now, Fortran at college was a high-level language. In the business world COBOL had come in, but many programmers worked at a more elementary level. Equipment used for accounting was typically programmed by—are you sitting down?—re-wiring its innards. So for different jobs there were different wiring panels, and several would be stored near the machine, to be used as required. 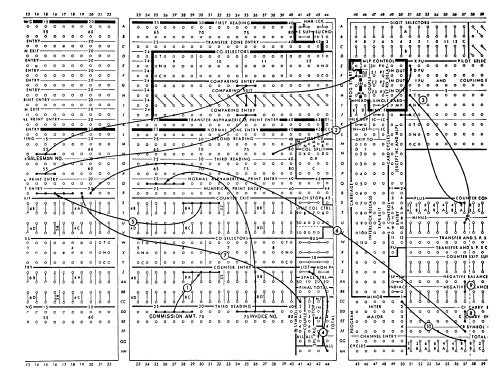 Here’s a snippet of the programming instructions for this report: 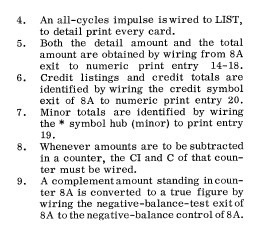 Everything, absolutely everything, came with an instruction manual. How quaint! For the IBM 402, it was half a bookshelf of notebooks.

By the time we graduated college, time sharing had taken hold. Both of us were into it. We got married. Immediately, a Teletype Model 33 arrived in our living room, and the longest off-premises extension in New York was set up from GE’s Manhattan switchboard to our little apartment in Coney Island. That line carried data at 10 characters per second. We no longer used cards, we had paper tape. Much more civilized. And you could play games with the holes, like punching holes to form the letters of a message.

We saved the paper tape chads and when our friends got married, we threw a bagful on the limo like confetti. Oops, it got sucked up into the air conditioning and inside, they and everything were covered with little yellow paper tape chads. They never spoke to us again.

Later, in Japan, our first personal computer had a five megabyte hard disk drive. It had eight-inch platters. It also had a dual 5 1/4 inch floppy disk drive with an independent controller, just like the big computers. So for example you could issue a copy instruction and it would copy a disk without the intervention of the main computer, which could be doing something else. In that, we have taken a step backwards these days by giving up true peripheral controllers.

Gigabyte wasn’t in our vocabulary. The machine had only 47K bytes available for programs, which was 1K less than standard because it had a Japanese-language operating system. So some programs wouldn’t run.

But it booted up in about 15 seconds and usually did what we told it. That also has been lost over time.

I'm so old my first computer was an abacus.


Come to think of it, so was mine. When we got to Japan, I bought a little plastic abacus. On business trips I would use the abacus on the plane to calculate my expense account. It got a lot of stares and questions, including, "how do you use that?"

There were no portable calculators then. The first was the Busicom, which I just had to buy. I still have it someplace.


I also took part in those halcyon days transitioning from slide rules to punch cards. I still vaguely remember the Hollerith code, and was the only one I knew back way back when who could read the utility bills sent to our house (they came in the form of a punched card). During my first semester of college we learned to insert the looped wires to instruct the computer to sort, collate, etc., so I was pretty thrilled when the first personal-sized computers came out, even if they did have only 24K of RAM. That Tandy TRS-80 (known affectionately as the Trash-80) had only a few lines on its display but we could still hammer out an article on it.