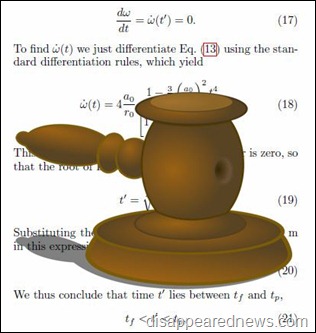 A scientist decided that he would “tell it to the judge” and this time, the judge listened.

And learned, it appears.

Thanks to a “very unusual combination of circumstances” and a quick set of calculations, a UC San Diego scientist successfully fought a $400 traffic ticket with a four-page research paper.

In the paper, entitled “The Proof of Innocence,” Krioukov offered a series of equations and graphs to show that it was physically impossible for him to have broken the law, as an officer claimed.

The LA Times article provide links to the paper itself and to the abstract.  I know geeks will want to study his methodology. From the preface to the paper:

We show that if a car stops at a stop sign, an observer, e.g., a police officer, located at a certain distance perpendicular to the car trajectory, must have an illusion that the car does not stop, if the following three conditions are satisfied: (1) the observer measures not the linear but angular speed of the car; (2) the car decelerates and subsequently accelerates relatively fast; and (3) there is a short-time obstruction of the observer's view of the car by an external object, e.g., another car, at the moment when both cars are near the stop sign.

Reading the paper, it might work in Honolulu, except of course that police do not often enforce traffic laws here, so opportunities to test its effectiveness may not readily present themselves.  But I’d love to see how a Honolulu traffic court judge reacts when presented with the graphs and equations in a case that presents the same or similar circumstances.